Why Go For A “Mini Command Center” When We Can Have Everything Under One Roof? 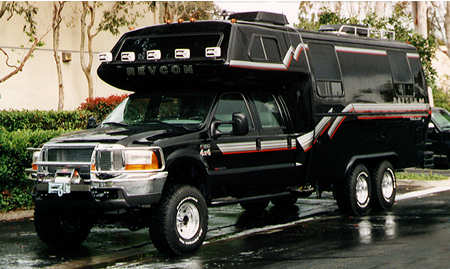 Yesterday Lohnes showed you guys the Lloyd van. You remember, that German thing that looked like a Stout Scarab decided to puff itself up and look huge for the ladies. Bleeech! Nothing against the little thing…it’s cool in it’s own right…but to suggest that micro-van as a BangShift-worthy command center made my head hurt. 19hp is fine if you want to mow a lawn or build a go-kart, but not for something we’d have to work out of. Currently, out of all of the vehicles that are under the BangShift umbrella, Chad’s $200 Hauler Suburban is the one best suited for the task: With all of the rear seats folded, it can carry all of the live feed gear, Chad’s luggage, plenty of snacks and still has just enough room for the Chadster to crash out if he really needs to. Plus the air conditioning in that thing rocks and it has more than enough power outlets to allow one person to get some work done.

But as it’s been apparent for the last couple of years, BangShift is growing by leaps and bounds. One man in a Suburban road-tripping the whole country while another gets frequent-flier miles by the boatload can be a strain, especially when their relief is usually pinned down at home to hold down the fort. It’s a predicament that we honestly love having, because it means that we are doing something right. But, just for the sake of discussion, let’s say that somehow the site has just enough of a financial windfall one year, and the powers at be decide that we’re gonna take this show on the road. All three of us. What do we use? How would we do it?

Being the frugal-minded people we are, let’s ignore the unbelievably expensive RV’s and brand new tour buses. Those things can cost as much as a house and as cool as they are, are radical overkill for what we would need. What we would need must be able to eat Interstate miles like none other, be comfortable enough to sleep in, have the kind of A/C that would freeze Hell, and be able to look good as we rolled around. It’s a tall order, but let’s look at a few options I’ve selected as an alternative to a 19hp German toaster oven: 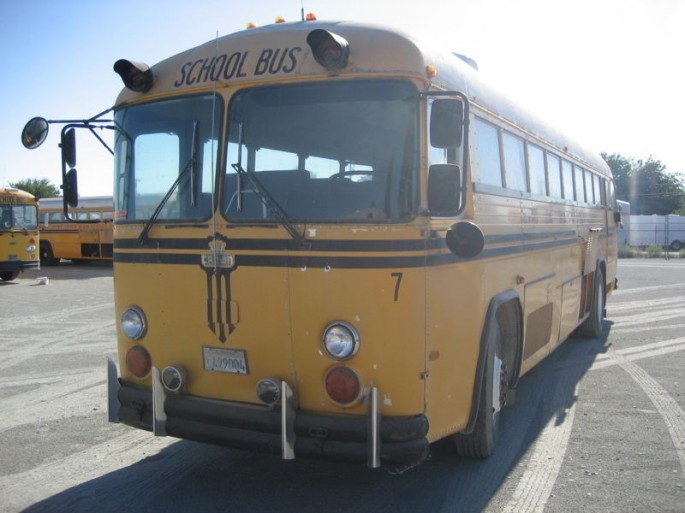 The beauty of this selection is that there is a wide array of bus styles to choose from, from conventional-nosed pieces based on medium-duty trucks to the “twinkie” buses that are popular on the West Coast. While my tastes lean toward the mid-1970’s Gilligs, none were on eBay. This 1986 Crown, however, was. Sporting a Detroit 671 Turbo motor and a five-speed manual transmission, this thing has the ability to be absolutely awesome. Ditch the school bus livery, get some Alcoa wheels, and mod the interior to be what we want, and this thing would easily fit in. The downsides include gear limitations that would make this thing slow on the Interstate and the fact that this thing reeks of thirty-odd years’ worth of teenage hormones. But for a cost of $3,100, there’s a lot we could look over. 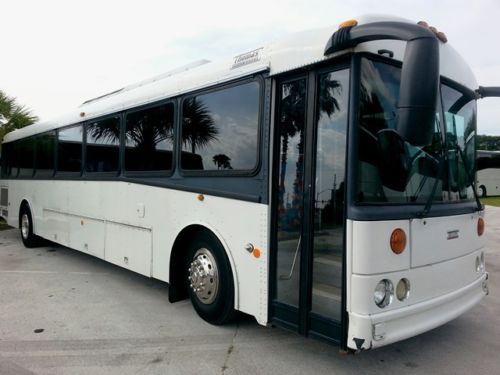 Now we’re getting some room! These flat-face buses are the same rough dimensions as the typical large RV (before you slide out the sides and turn it into a house with a license plate) and can cruise forever when maintained. Bonus: It’s got a bathroom! It’ll barely fit McTaggart and heaven help us all if toilet breaks, but it’s there when you need it. Add in tons of under-body storage and a blank-slate interior that might even have an entertainment system installed and lots of the work is already done! This 2007 Thomas/Freightliner might be a little spendy at $40,000, but the parts are available and the work minimal. 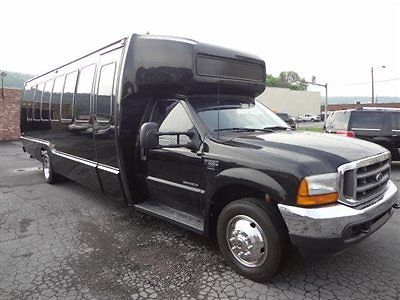 Here we’d have to be careful, but if you know how to look, some of these are awesome. This 2001 F550 party bus has several good things: rear storage for supplies, gear and luggage, a sweet black-leather interior that any of us could sleep on, a bar, and it even has a useable can. Mercifully, this particular Ford doesn’t have the mirrored ceiling, stripper pole or coke dust anywhere in sight. For $31K, this could be it.

What say you, BangShift readers? Keep in mind that money IS an object around here, but what would you like to see us use as a mobile command center? What would look cool parked at Bonneville, at a drag strip and at a mud bog competition? Tell us below!

This 1941 Willys Is The Last Vehicle You'd Expect To Find For Sale At A Volvo Dealership! 2014 NHRA Sonoma Nationals: The Lost Professional Category Photos

6 thoughts on “Why Go For A “Mini Command Center” When We Can Have Everything Under One Roof?”