The Day The Bridge Fell Down: Amazing Footage From The Tacoma Narrows Bridge – An Engineering Failure For The Ages

Sep 05, 2019Brian LohnesBangShift NewsComments Off on The Day The Bridge Fell Down: Amazing Footage From The Tacoma Narrows Bridge – An Engineering Failure For The Ages 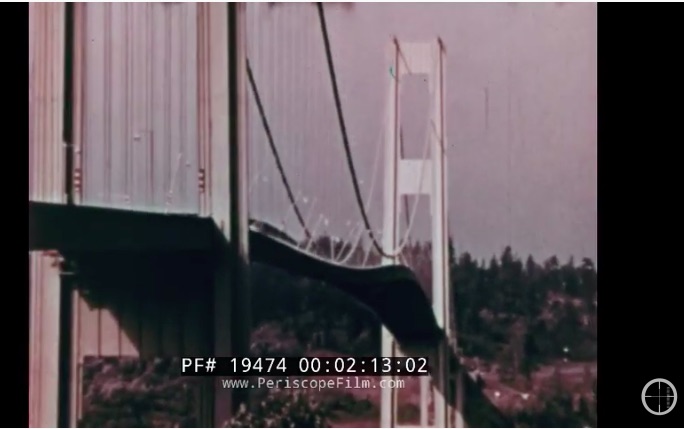 Of all the forces in the world one would blame for twisting what was the world’s 3rd longest suspension bridge into a pretzel and causing its collapse, wind would likely not be one of the but that’s just what did in the Tacoma Narrows bridge. The span was opened in July of 1940 and you’ll see footage of that big day. The span fell into the Puget Sound on November 7th of that same year after its bizarre proclivities had brought it to worldwide fame as “Galloping Gertie”. The span was taken to moving almost constantly. Moving is a bit of an understatement, it was taken to heaving. Some days the heaves would be small, like little rolling hills and on other days they would be massive, causing drivers and the State of Washington much consternation over what was causing the situation and what could be done to fix it.

By May of 1940 the situation had gotten so bad that the state hired engineering professor FB Farquharson to get to the root of the problem. He worked the issue relentlessly, building an incredible scale model of the span in his laboratory and subjecting to it to any and all of the forces he suspected to be at work on the bridge. It was the invisible forces of the wind that whipped over the bridge that he fingered as the culprit and he was right. Able to generate proper wind volumes and speeds in his lab over the model bridge, Professor Farquharson replicated the Tacoma Narrows bridge to a T. The winds would cross over the bridge at speed and the span would act like a wing, a really poorly designed and flimsy one. The bottom line is that the wind matched the natural resonance of the bridge and that’s why the twisting began and got ever more worse with even incremental increases in wind speed.

Using huge smoke generators to see what the air was actually doing, his theories were validated and solutions were sought. Unfortunately the time window was drawing to a close faster than anyone had suspected. On November 7th with a 42mph wind blowing over its deck, Galloping Gertie went into flexes and spasms the likes of which no one has seen before or since. The bridge twisted itself to death before its center gave way and dumped with a mighty splash into the water.

Because of WWII and other factors, it took 10 years to get the replacement bridge built. That bridge was wider and engineered to meet the needs of the environment that it would be living in. The replacement bridge served as the primary traffic path for cars and trucks until 2007 when another bridge was opened parallel to it in order to handle the modern traffic needs of the area.

A Suspension For Your Suspension: Can You Replace Your Tires With Coil Springs? Incredible Read: This Profile Of Danny Thompson And The Challenger 2 Is Automotive Writing Perfection