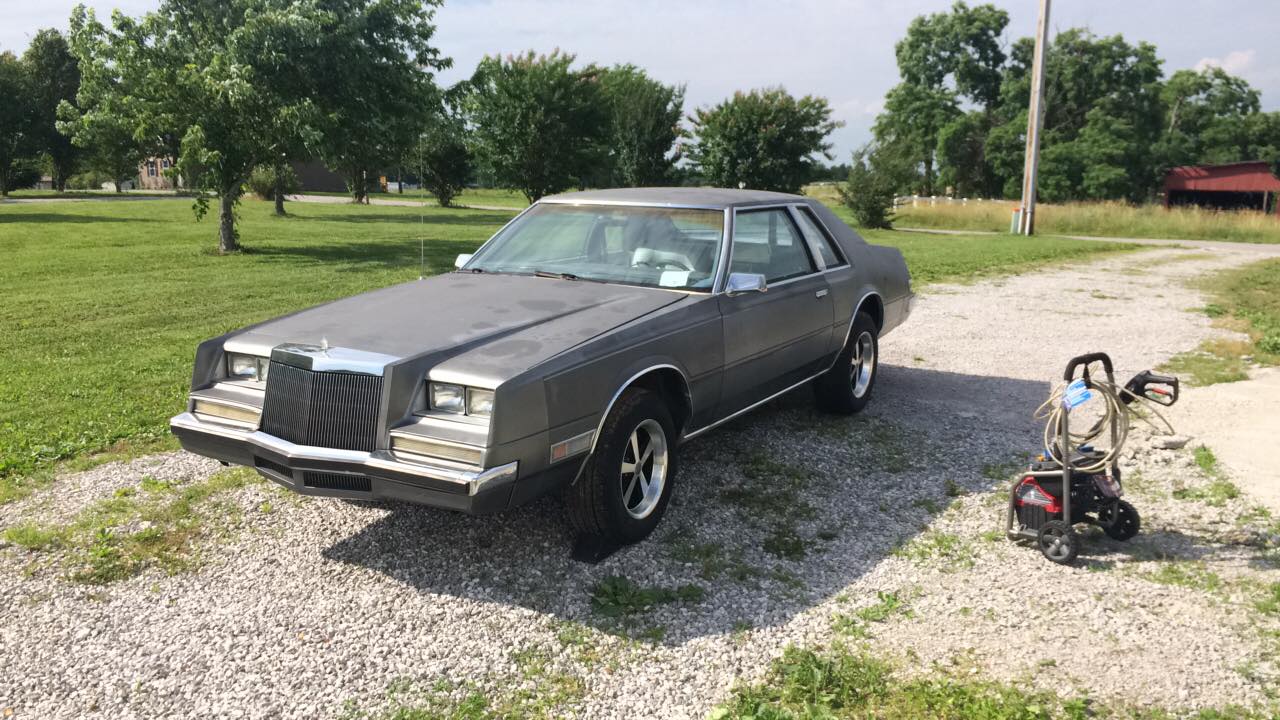 In the last update, we got Raven, the 1983 Imperial that is doubling as my penance for something I did in a past life, up and running after the 367ci small-block Mopar ate a camshaft keyway. Happily, I’m happy to report that fuel delivery is no longer an issue and that the engine snaps to life with a quick hit of the key…considering it’s the first engine that I’ve built, I call that a win. But as I mentioned on the last update, I still have plenty of work to do if I’m going to make Austin Griggs’ “Mopar vs. Brand X Showdown” event in October, and next up on the docket were two items I was not looking forward to handling: the throttle cable situation and the kickdown setup for the TorqueFlite automatic.

Back when the prior engine was being built for the Dodge Mirada I owned at the time, the individual I had trusted to build the engine for me while I was away was too eager to inform me that the kickdown setup on the car was an absolute pain in the ass and that he had to weld and re-weld the system to make it work. It’s not surprising…Chrysler’s system of rods and bellcranks works perfectly fine if everything is perfectly stock. Change one thing in the system, like the carburetor, and you now run the risk of the kickdown setup being out of whack. And that’s not a good thing, since the kickdown lever on the A904 needs to be in motion and in sync with the throttle linkage at all times. Since I was running a four-barrel Carter on a platform that never used such a setup. Unless you can find one of the 76 1980 Dodge Miradas that came factory with a four-barrel (or a similarly-equipped four-door Dodge Aspen/Plymouth Volaré), you are out of luck.The throttle assembly was an even bigger issue. My particular car is one of the few 1981-83 Imperials that I’ve seen that was never converted back to carburetion via the factory’s parts. I still had a full EFI system, but with a fuel tank that was completely rotted through and a TBI “pie plate” system that may have caught fire a couple of times during some early work. Not only was my kickdown situation complete hot garbage, but my throttle cable had to be rigged just to function well enough to operate. Not good on any account. 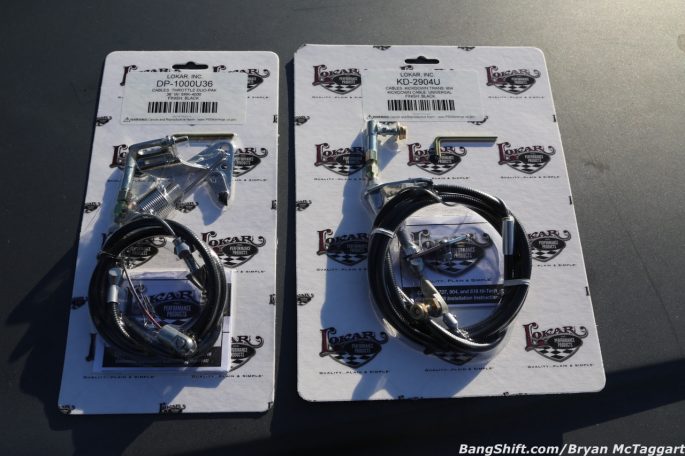 So when I saw the Lokar Performance Products booth at the Tri-Five Nationals a few days ago, I stopped in and asked a couple of questions. In short order, a box appeared at my house and inside was the answer to both problems. They sent part numbers DP-1000U36 to fix the throttle cable situation and KD-2904U for the kickdown. Both kits come with the necessary brackets, hardware, Allen keys and foolproof instructions on how to install them. Follow along with the photos as I show you how Lokar made both of these tasks a simple fix. 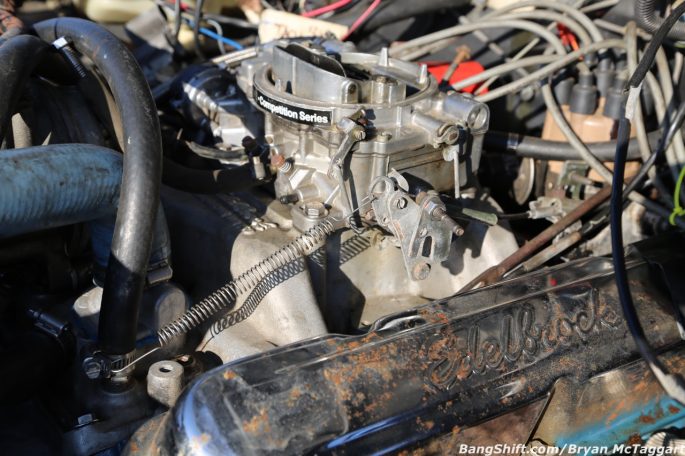 Here was the scene before any work started. Throttle spring hooked to the worm clamp for the heater hose, kickdown unable to be hooked up completely (you could hook one end or the other, but bot both) and added brackets for…well, who knows, really. This is all from the original Mirada’s engine build in 2010-2012. Except the spring…I’ll take the blame for that. 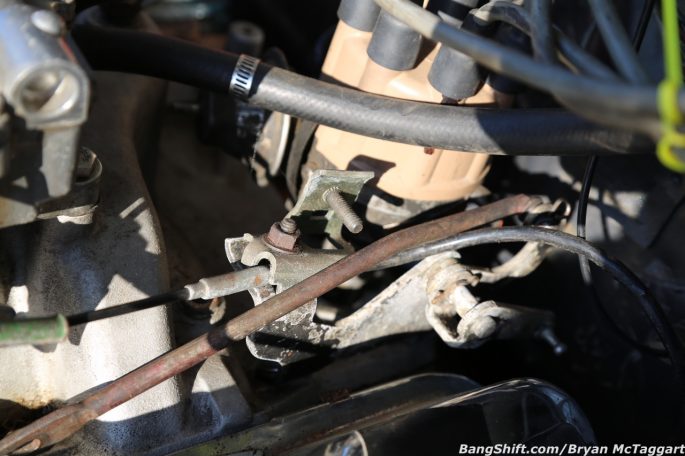 And here’s the throttle cable mashing…er, clamping system. Honestly, I’ve seen this setup on four different cars done right, and on the Imperial, none of them worked thanks to the strange-length EFI throttle cable. My best hope was to put the silver section of the cable as far forward as I could get and then crank down the nut until I nearly sheared off the stud. 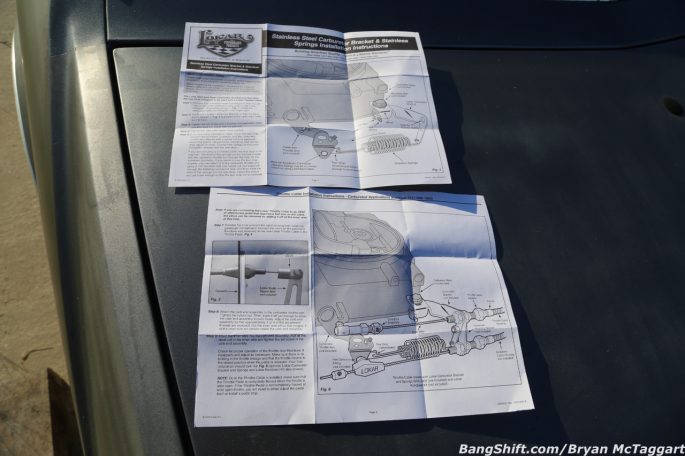 The instructions are bulletproof. Not only do they give you the steps in the order that works the best, but the diagrams are as clear as they can get. If you still manage to botch up an install using their instructions…well, maybe you should Craigslist your tool kit. 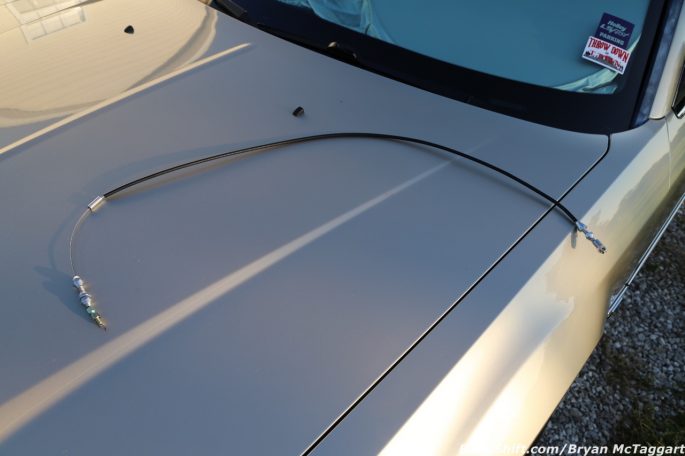 Step one: the throttle cable. That’s thirty-six inches of sheathed cable that you can trim down to fit your setup. 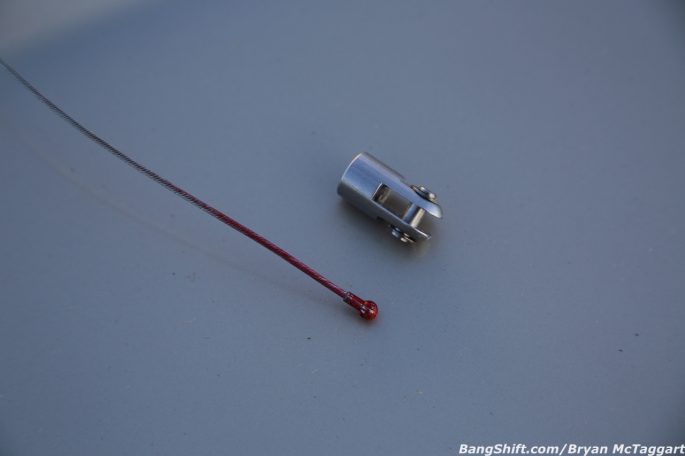 If you choose to run one of Lokar’s throttle pedals, the clevis at the pedal end of the cable is your connection device. In my case, I’m keeping the stock pedal, so the clevis comes off and the wire is routed through the catch at the top of the pedal. 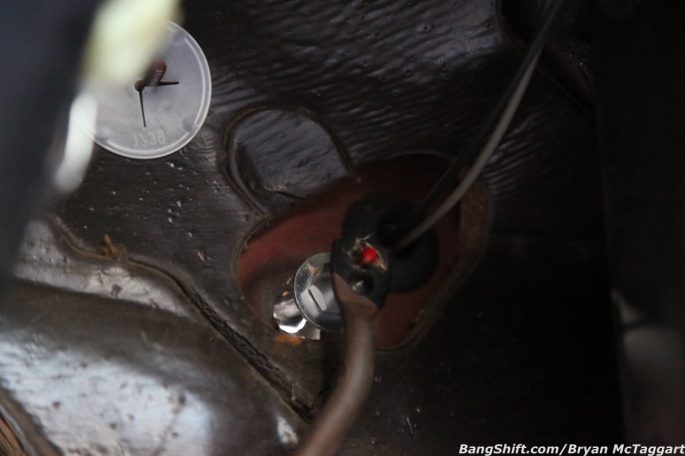 Depending on your cable location, you may need to drill a 5/16ths hole in your firewall to fit the cable housing adjuster. In my situation, I knocked out the plug that held the original cable in place, routed the adjuster through, and filled with sealer before adding a washer on each end and tightening everything down. 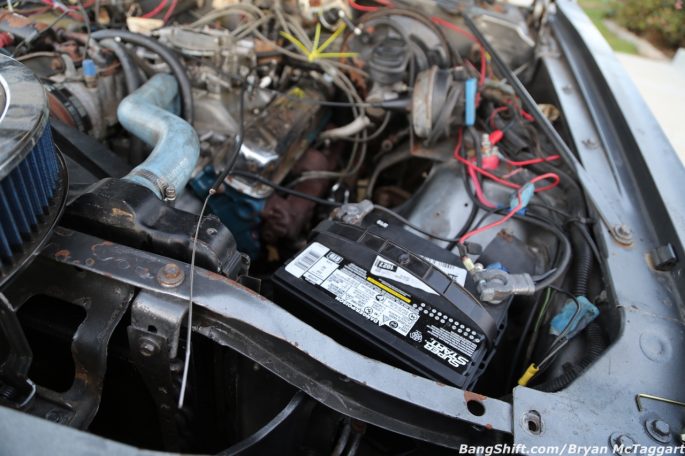 With the throttle wire hooked through the pedal and routed all the way, this is how much you’ll have left to work with. Unless you are trying to put an aftermarket pedal in a Peterbilt, you’ll have enough cable to spare. Once you have determined where to trim the cable housing down, pull the cable back out of the sheath and cut. Remember that part…you don’t want to buy another kit because you trimmed the actual cable too far! 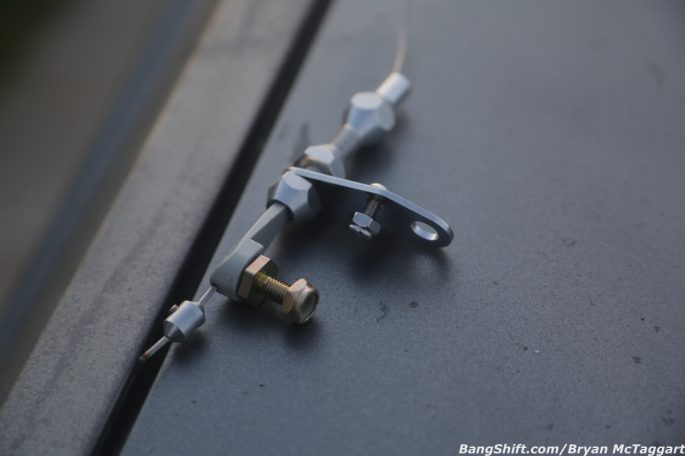 Up next is the transmission kickdown. This is the carburetor end of the kit…it comes with a modifier for the main carburetor bracket and an adjustment slide stop that butts up to the slide fitting that bolts to the throttle assembly on the Carter four-barrel. 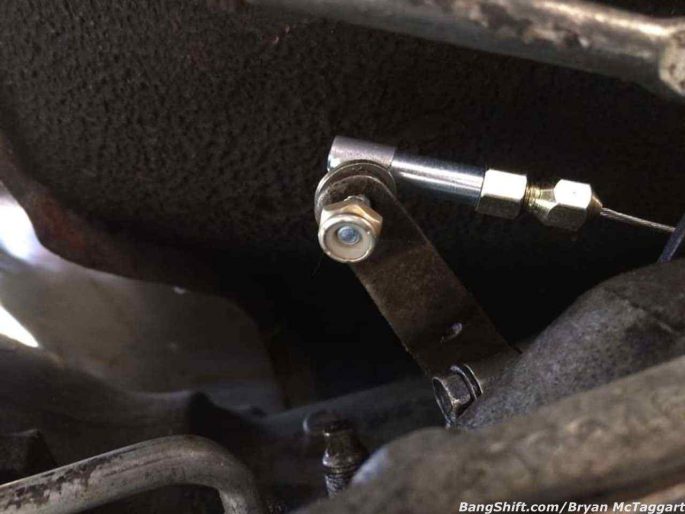 At the other end is a simple ball-and-socket style pin for the kickdown, complete with a nylon locking nut at the end. Just tighten this down fully… 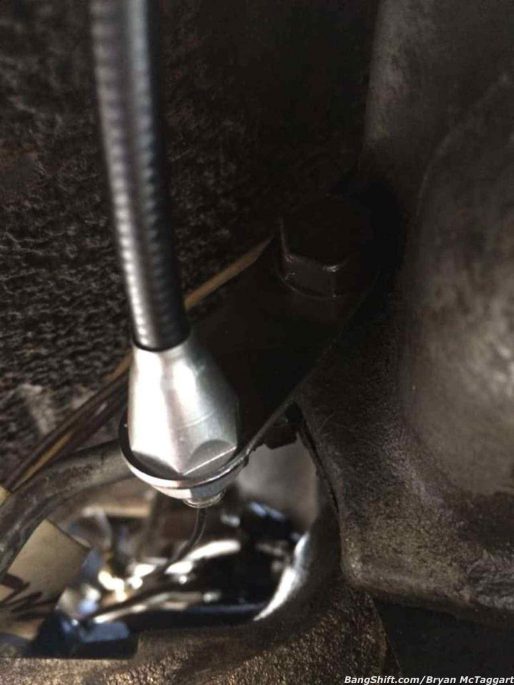 …and mount the cable bracket to the transmission housing via the lower-left tailshaft bolt. Route the cable sheathing up into the engine bay. 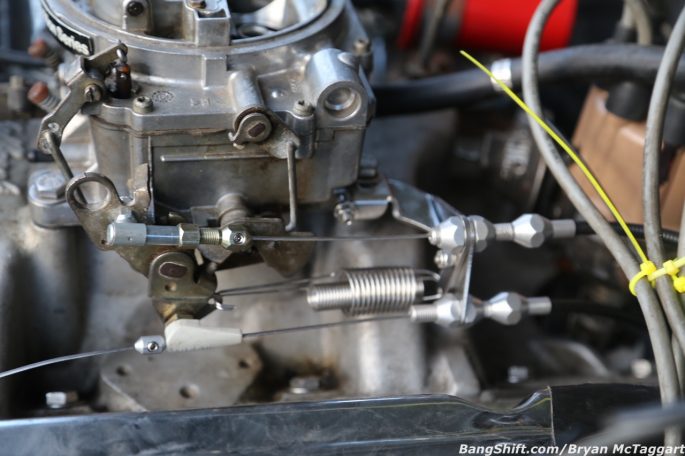 Just like the throttle cable, you measure the sheathing, then remove the cable, trim the sheathing, and re-run the cable back through. For the kickdown, you need to have a helper stand on the throttle while you pull the cable to it’s tightest before tightening the slide stop down. For an A904, be sure that the kickdown is fully open when the throttle is fully opened. Only when you are certain you’re there, do you trim the excess cable off. In my case, I left a little bit for future adjustments.

Compared to the garbage that was barely functioning, the Lokar kit looks ten times better and will function properly. With a friend helping you, both of these jobs combined would probably set you back maybe an hour each. Maybe. Compare that with hunting swap meets for the right kickdown and tell us if you don’t see the cost savings. Now the throttle setup isn’t janky and the transmission’s life won’t be unnecessarily short. And as an added bonus, the quality of the design at the carburetor really classes up the joint. Another issue fixed on the road to the Imperial’s return to the streets! With luck, we just might make the race yet…if we can get miles on the car, which means we need to get the noise level down to “legal”, and soon.