Rust Removal Battle: Which Is Best? Evapo-Rust Or Electrolysis? Watch And Find Out. 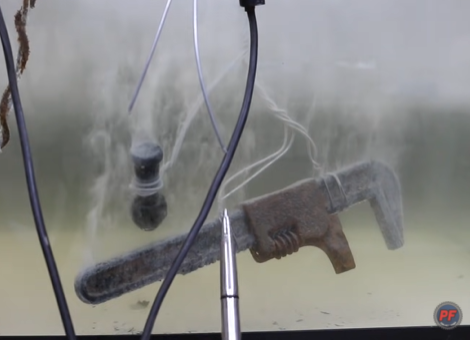 Rust sucks and no matter where you live there are times where it rears its ugly head and is a pain. Whether it’s car parts, a tool left outside in the rain, or whatever there are definitely times when a good rust remover is needed. I bought my first jug of Evapo-Rust nearly 20 years ago when it came in a gallon jug with a printed label that was taped on the jug. I had seen a demo at a swap meet and decided I couldn’t live without it. I had that jug for years and years and used it a bunch of times. It’s like magic because it won’t harm you, isn’t caustic, and does a very very good job at removing rust on anything you put in it. But is there something better? In this video you’ll see that some folks think Electrolysis is a better way to remove rust and, quite frankly, I have no idea if they are right or not. Thankfully you’ll know by the time this video is done.

When it comes to rust removal, is electrolysis better than Evapo-Rust? Neither process involves the use of acid for removing rust, which is critical for restoring certain types of rusted items. A side-by-side comparison is accomplished on rusted wheel-stud lugs to see which process is best. I also use electrolysis to remove rust from a badly rusted wrench. I hope you enjoy the video and I really look forward to reading your comments.

Competition Plus Historic Video: THE FIRST 15 YEARS OF NHRA PRO STOCK: A QUICK LOOK Dakar 2022 Video Highlights: Stage 9 Extended Highlights Are Right Here And You Don't Want To Miss This!

One thought on “Rust Removal Battle: Which Is Best? Evapo-Rust Or Electrolysis? Watch And Find Out.”