VW Tech: How To Pull The Body Off A VW Beetle And Then Bolt In A New Pan 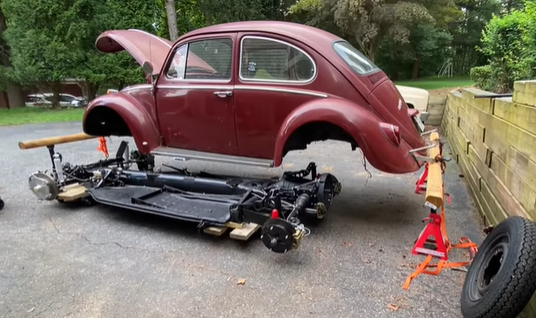 VW Beetles are some of the coolest little cars every made, and are beloved by people all over the world. Besides being cool, cute, economical, and fun, they are also super simple and easy to work on which is one of the things VW enthusiasts always talk about. I’ve heard all kinds of stories about how little tools you need to pull the engine out of one, and have seen tons of mods and restorations done that seem incredibly simple and straightforward. One things I’d never seen done though is replacing a whole pan on one. I’ve seen photos of a pan sitting on its own, and I’ve seen a body without a pan, but never actually seen the process of disconnecting the two so that a new pairing can be made.

The pan on a VW Beetle is the “chassis” if you will. When bolted together they make a unibody car, but they can come apart and a VW pan can just roll around on it’s own. I suppose that with some simple wiring it would actually drive around with you driving with no body. Sounds funny, but it doesn’t seem to be much of a problem with one of these. Check out the process for swapping out a rusty old pan for one that is all fixed up and ready to rock. We dig it.

Flathead Tech: How Ardun Overhead Valve Heads Work On A Flathead Ford Online Find: This Straight Axle Gasser 1957 Chevy Has A 5.3L LS Swap, All The Old School Attitude, And Drives Like A Champ!