The Movies of the 1960s and 1970s Were an Automotive Goldmine, and Not Just in the Movies You Know

These days — especially in places where it snows — it’s rare to see someone driving around in a modern Challenger or Camaro SS as a daily driver. Most of the time, those cars will be relegated to the garage for six months of the year, while the daily driving duties are left to the RAV4 or the Accord. But in the 1970s, you had one car, and if it was a cool muscle car, you threw snow tires at it and drove it all year long. That’s reflected in the movies of the 1960s and 1970s. And not just the usual suspects like Smokey and the Bandit or Hooper. It was in regular movies that really had nothing to do with cars. Here are five to put in your Netflix queue that really give you a sense for what driving around in the 1970s looked like: 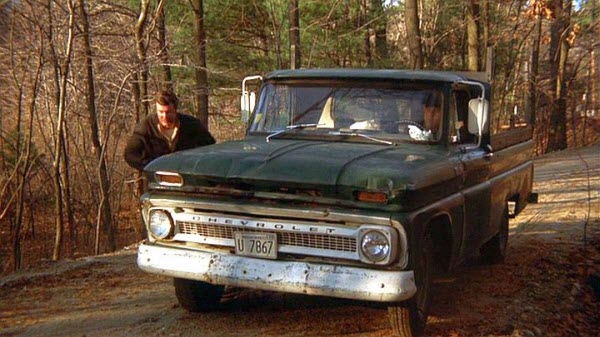 You might not know director Peter Yates’ name offhand, but you should. He was the guy responsible for Bullitt in 1968, and he put together a string of movies through the 1960s and 1970s that modern directors should study like a master class. In one way or another, cars seemed to always play almost as important a role as the actors themselves.

The Friends of Eddie Coyle is one of those films. It’s a gritty gangster flick set in Boston that set the stage for other Boston-based gangster movies like The Town and The Departed. Only this was back in 1973, when the entire city of Boston was a cesspool of nefarious dealings. 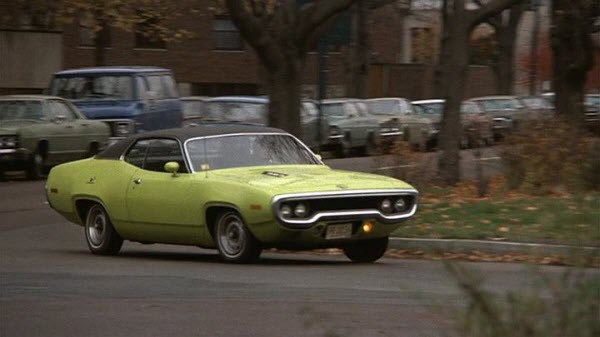 The movie stars Robert Mitchum in one of the last movies in his career, and he’s perfect. The cars are great, too. You might remember the actor Steven Keats as “Kandinsky.” He plays a gun-runner in this flick, and he drives an awesome 383-powered 1971 Plymouth Road Runner in Curious Yellow. 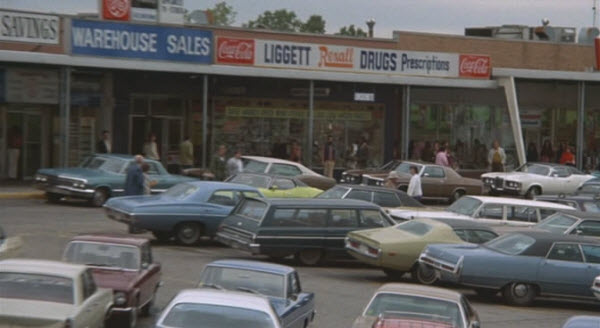 The cars in the background scenes fit the setting perfectly, because every single scene was shot in and around the Boston area, and the cars you see in parking lots were really in parking lots in and around Boston, circa 1972 when the movie was shot. You’ll spot all kinds of American cars from the 1960s and 1970s, but there’s also an Alfa Romeo 1750 Berlina in there, too. 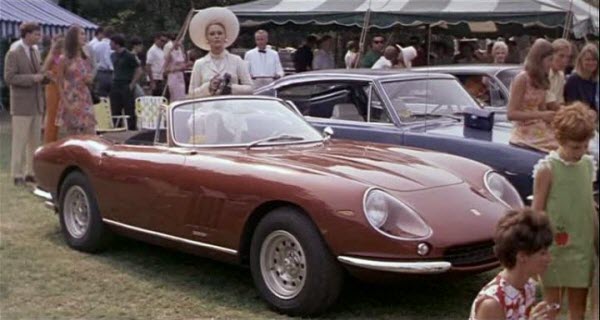 Norman Jewison is another director that doesn’t get his due when the directors of great car movies are mentioned. Along with this movie, he directed the also Massachusetts-based comedy The Russians are Coming, The Russians are Coming, a veritable goldmine of 1950s and early 1960s cars locked on what’s supposed to be an island off the coast of Gloucester. He was also the guy behind the dystopian motorcycle/roller derby flick Rollerball, starring Jimmy Caan at his Playboy Mansion-lurking finest. 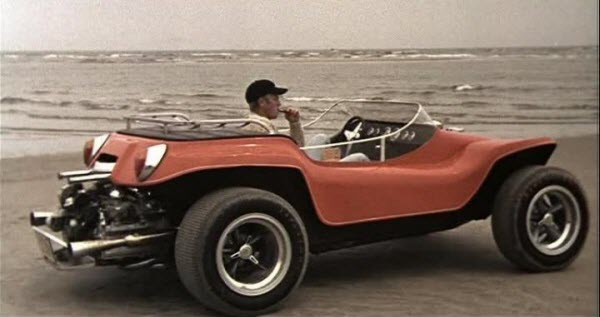 The original Thomas Crown Affair is littered with some of the most incredible cars in film. There are some awesome driving scenes on Nantucket with a Meyers Manx  dune buggy, and a lot of the really exotic cars, including a 1967 Ferrari 275 GTB, were from Steve McQueen’s own collection. 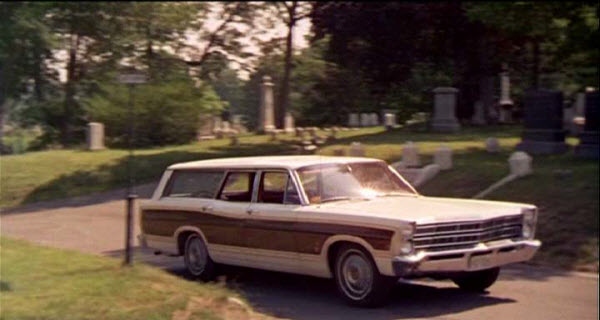 The coolest stuff is in unobtrusively integrated into the plot, though. The 1967 Ford Country Squire Jack Weston drives, for example, is an integral part of the plot, as it subtly makes its way west from a bank heist in Boston, traveling past landmarks on the Mass Turnpike along the way. If you don’t want a wood-paneled wagon after seeing The Thomas Crown Affair, you may, in fact, be a robot. 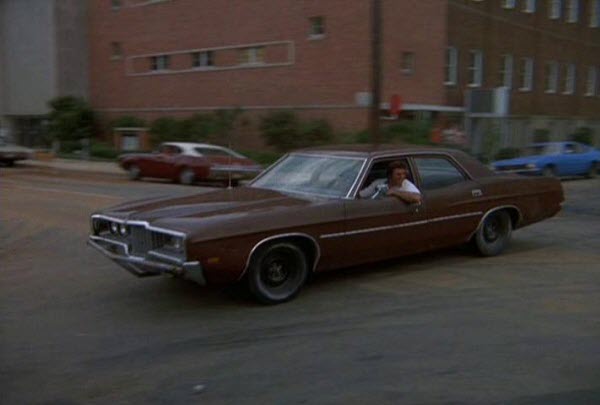 Joseph Sargent has made some crap movies in his day. Jaws: The Revenge, for example, might be one of the worst movies ever made. But the guy gets a pass from us forever for directing the incredible original adaptation of The Taking of Pelham 1, 2, 3 and this movie, which came along years before Burt had a Trans Am, or even a moustache.

The cool thing about White Lightning is that cars are a part of the action, but they’re not the kind of cars you’d expect. If they made this movie today, these cars would be 1990s Toyota Supras and Subaru WRXs, with basket-handle rear wings and neon lights under the ground effects.

In 1973, when you made a movie about hillbillies running hooch, you put them in a Ford Custom 500 sedan, and you paint it brown and throw the hubcaps in the trash. You beef it up with a four-speed and a killer soundtrack from under the hood, but you keep a low profile. 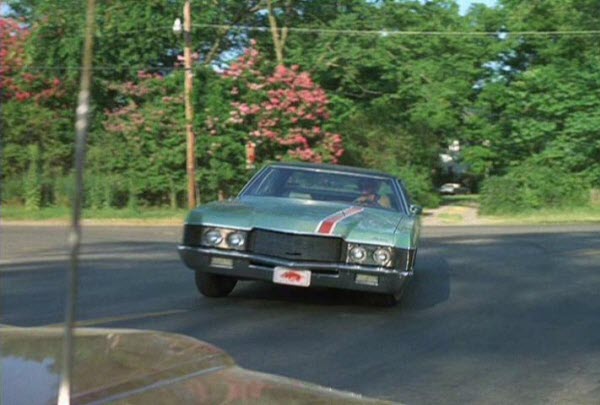 About the only flash in the movie is the red stripe running up the hood of “Rebel” Roy Boone’s 1971 Mercury Monterey, but it’s green, for God’s sake. Nobody’s gonna look twice at it. The more you see this movie, the more authentic it feels.

Paul Newman only directed four movies. Sometimes a Great Notion was the adaptation of the unreadable Key Kesey novel (the second book after One Flew Over the Cuckoo’s Nest), and if you like working vehicles from the 1970s, you have to put it on your list.  It was streaming on Netflix a few months ago, and it occasionally runs on some on-demand cable offerings.

I remember watching this movie on a crappy black-and-white television in the early 1980s and being transfixed by Paul Newman’s 1971 Blazer, with white steel wheels and no hubcaps,  cruising around the Pacific Northwest with the roof off. I’ve wanted one just like it for 35 years, just like I’ve always wanted Chief Brody’s Blazer from Jaws.

The movie is shot on location at logging camps in Washington, and the trucks and heavy equipment running around are the coolest. Look for a vintage Land Rover short cab, a 1966 Chevy Suburban, a K10,

There’s also a hare scramble sequence with some great 1970s dirtbikes, with Paul Newman astride an early 1970s Husqvarna. 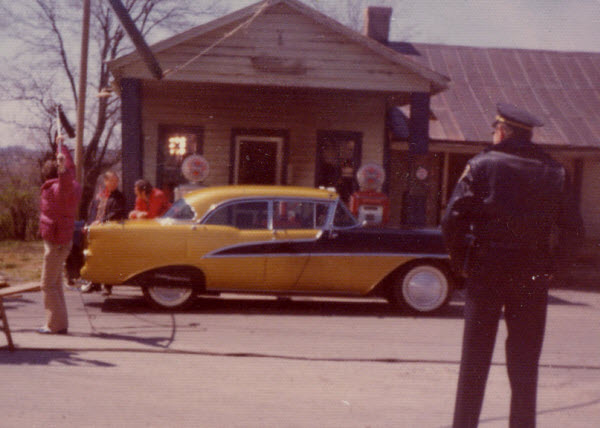 This is a great movie by John Avlidsen, but it’s largely forgotten because a year later, he’d go on to direct Rocky, and when you put one of the most popular movies ever filmed in the can, you never talk about movies like W.W. and the Dixie Dancekings ever again.

It also stars a pre-moustache Burt Reynolds as a stickup man-turned-country and western swing band promoter, which is probably the career path for anybody who was a band manager in the 1950s.

One car plays a central part in the movie: a 1955 Oldsmobile Golden Anniversary Rocket 88. In fact, no such Oldsmobile existed. If you bought a basic 88 in 1957, it was called a “Golden Rocket,” but this isn’t that car. It was something cooked up specifically for the movie, a gold-and-black two-tone 1955 Oldsmobile Sedan. 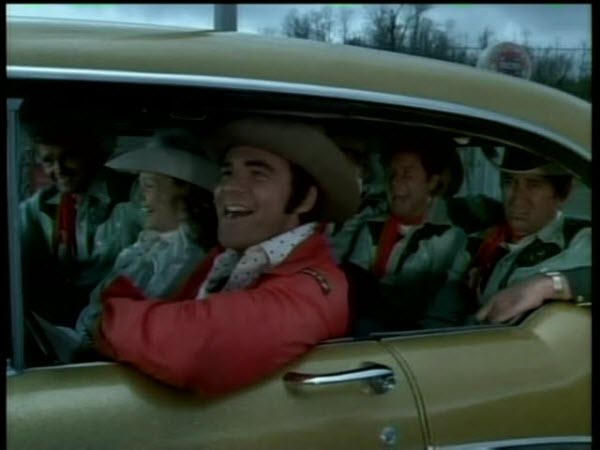 It plays a central role in the movie, and it’s the main tour vehicle for the band. Not sure how an entire five-piece country and western swing act fits guitar cases, amps, mic stands, PAs and a doghouse bass in an Oldsmobile, but we’ll chalk that one up to creative license.

This is another one of those classic movies you saw on black and white TV in the early 1980s, and nobody’s ever seen again. You can’t even find the movie listing in the Internet Movie Car Database.  It’s cool not only because of the car, but because it’s the first time Burt Reynolds paired up with Jerry Reed, and we all know what that led to.

Drag Week 2014: All The Dates, All The Tracks, All The Info You Want And Need - Photos From The Original 2005 Event HERE! A Video Peek At The Jet Hot Double Down Roadster From Full Hot Rods

9 thoughts on “The Movies of the 1960s and 1970s Were an Automotive Goldmine, and Not Just in the Movies You Know”