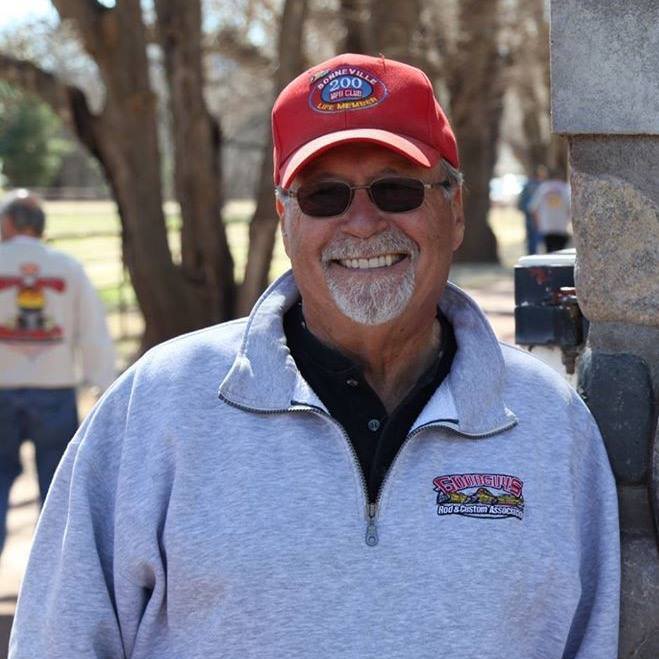 It is with a heavy heart that I write this. Gary Meadors, the Founder and Chairman of Goodguys Rod and Custom Association died suddenly today. When I got the news this afternoon I found myself standing in a wrecking yard wearing, of all things, a Goodguys sweatshirt. I think Gary would be proud. And after learning of his untimely passing I spoke to Ed Capen, a long time member of the Goodguys family who told me the details of his last morning with us. And while feeling sad, and shocked, I found myself smiling when Ed talked about Gary’s lifelong sweetheart Marilyn and her amazing resolve. She is the matriarch of Goodguys, and has always been the co-captain of the ship, keeping Gary heading in the right direction. Our hearts, thoughts, and prayers go out to Marilyn, Marc, Marty, and their families during this trying time.

My first car shows were Goodguys shows in Pleasanton. My dad and I started going in the mid 1980’s, collecting many of the parts on my Camaro at the Pleasanton Goodguys swap meet. I’ve known Gary personally for nearly a decade. He had an infectious smile, a big heart, and a presence that made everyone around him better off for knowing him. I’ve been announcing Goodguys Autocross events for I don’t know how many years now, and have had the pleasure of traveling cross country with Gary and Marc during the Rodfather Tour. They drove Gary’s recently completed 1948 Chrysler Town and Country convertible, and there wasn’t a single person having more fun than those two. Seeing Gary cruising down the road, with Marc catching some zzzz’s against the passenger door, with that big infectious grin on his face made everyone smile. And he wasn’t just about cruising, even though he has driven hundreds of thousands of miles behind the wheel of a hot rod, as Gary is also a member of the famed Bonneville 200 mph club.

Gary’s friends, the likes of whom include every iconic car builder on the planet, consider him to be as big a force in the hot rodding world as anyone and with good reason. He will most certainly be missed. His accolades go well beyond Goodguys as we know it. Growing up in the central valley of California, Gary was bit by the hot rodding bug early and hard, and it came as no surprise to anyone that knew him when he founded Goodguys in 1983 after decades in the hot rodding world. What many may not realize is his huge commitment to, and role in, the success of modern day Nostalgia Drag Racing. In the early 1990’s Gary worked with SFI and the NHRA to create rules for and organize Nostalgia Drag Racing as we know it. When Goodguys resurrected the March Meet in 1994, grew it and handed it off to the Bowser family in 2007, it had become the biggest and baddest independent drag race on the planet and the world of drag racing changed forever. Not only do we, as hot rodders and racers, have a lot to be thankful to Gary Meadors for, but BangShift as well. If Nostalgia Drag Racing hadn’t been on such a rise in the late 2000’s we would never have started our live broadcast program.

I keep wanting to list all of the things that Gary did for hot rodding and racing, but the truth is all of that is secondary for me. The Gary Meadors I knew was bigger than life, a hero everywhere he went, had the ability to talk almost as much as me, and with an enthusiasm for cars that captured everyone around him. He touched more lives that he probably ever realized, but none more than his son Marc. And while Gary was all about his ’32 Ford Tudor, and lately his ’48 Chrysler, Marc is a Camaro guy that is all about going as quick and fast as possible in a straight line for 1320 feet. Publicly Gary would joke about Marc and his Camaro. And Marc always jokes about his old man giving him crap for racing his 1969 Camaro Pro Mod and more recently his 1970 Camaro Funny Car, but when I spoke with Gary about it you could see, no feel, the pride he held for his son’s accomplishments and passion. The cloth may be a little bit different color, but both men are cut from the same piece. I consider myself lucky to have become friends with Marc over the years, because of all of our time at the drag races together, and know that Gary was incredibly proud of the job that Marc has done as President of Goodguys over the past 8 years. You could see it in his eyes when he talked. But as much as his eyes sparkled when talking about his son and grand kids, nothing compared to the way he lit up when with his dear Marilyn. Together for more than 60 years, they are a pair that every couple should aspire to be. Marilyn is a joy to be around, a doting mother and grandmother, and the regal first lady of hot rodding. I last spoke to her and Gary at the Goodguys show in Scottsdale last month and found myself laughing and having a great time as usual. I’ll miss that, but I can’t feel too sad because I know I won’t be alone in that.

Marilyn, Marty, Marc, JessAnn, Bre Ann, Grace, Grant, and all the Goodguys Family, our hearts go out to you on this dark day. Godspeed Gary, thanks for everything.

Here are a couple videos featuring Gary, with a list of some of his great accomplishments below them.

Here are just a few of the accomplishments Gary Meadors has had in the hot rodding world.

-Fully incorporated Goodguys Rod & Custom Association in 1987 and set on a path doing national rod & custom events under Goodguys sanction – which continues through current day. In total – Goodguys has produced and promoted over 650 shows in more than 30 years.

-Developed the Goodguys worldwide membership to over 70,000 members

-Published over 300 issues of the celebrated Goodguys Goodtimes Gazette

-Developed Nostalgia Drag Racing into what it is today

-Brought the family aspect of the old car hobby to the forefront by making Goodguys events respectable, clean and fun family entertainment.

-Through Goodguys events, award programs etc., he helped develop trends, manufacturer’s and given thousands of new industry companies a platform to show and display their products

-Driven across America in a hot rod or custom over 20 times, racking up hundreds of thousands of road miles and putting countless smiles on people’s faces!

-Had a book published about his life titled “Goodguys Chronicles”

-Served as a freelance automotive journalist for many years teaming with his friend Bruce Olson forming the duo of “Deuce Bruce and Goodguy Gary.”

-Married to his wife and Goodguys co-founder Marilyn Meadors for over 50 years.

-If it weren’t for Gary’s passion for hot rodding, and the development of Goodguys, millions of people might never have known about our industry.

8 thoughts on “THE Original Goodguy Is Gone: Gary Meadors, Goodguys Founder, Has Passed.”