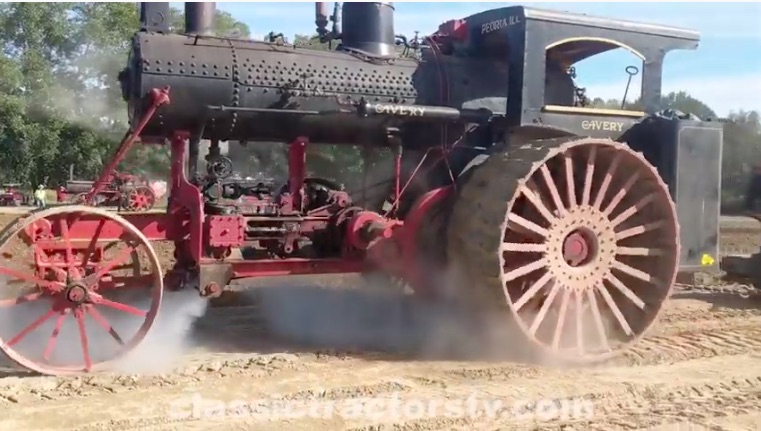 They are the iron giants that transformed farming over a rather short periods more than 100 years ago. The massive steam tractors that first showed up on large American farms were cantankerous, slow, hard to manage, and dangerous by today’s standards but by the standards of early 20th century farmers they were like something sent from the heavens. Farmers who made the investment into steam power saw the benefits immediately. The ability to work the same amount of land in a day as they did in weeks with animals. The increased production of their crops allowed them to afford such technology, which was by no means cheap in this era of time. Many farmers bought tractors as collectives and shared them among themselves.

The video you see here features three awesome beasts. The first is an Avery Undermount, named as such because the actual engine is below the boiler. An interesting and pretty unique design. It looks straight out of the wacky racers cartoon. Then there is a Sawyer Massey which is cool because of its unique rear wheels. It is the baby tractor of the bunch. Finally there is a massive Geiser Peerless tractor.

Because of the insane torque generated by these engines, they do not care at all about the multi-bottom plow behind them. Yes, the soil is pretty sandy where they are working but even with that concession, these things are still impressive for their sheer grunt. Watch the guy steer the Sawyer. It is not exactly quick ratio.

The guys working on the platform setting the height of the plow blades must have felt like they won the lottery when these machines showed up to farms as they were likely working with horse teams and mules to plow the land before this.

Homebuilt Perfection: This 1955 GMC Wrecker Was Made By A Body Shop More Than A Half-Century Ago Morning Symphony: 1976 Ferrari 308 Dino GT4 - Practical Mid-Engined Sweetheart