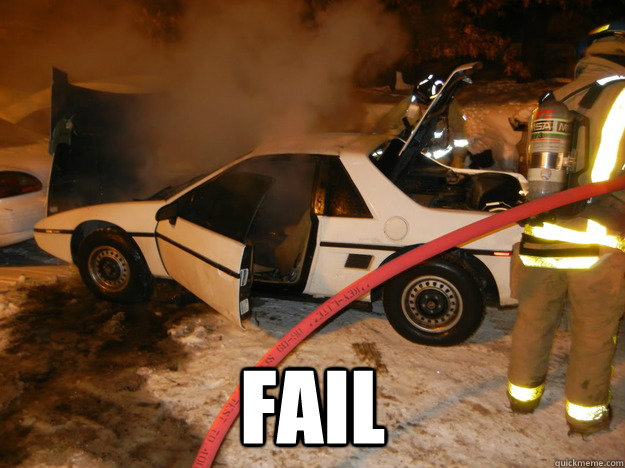 Ah, the 1980’s. Chevy Chase going ballistic at his family. Christie Brinkley in a droptop Ferrari. Hair metal. Things were good…unless you were into cars. The musclecar movement was only just starting to show a sign of life after being on an iron lung for ten years, and the hottest supercars from Italy were cranking out maybe 400hp. And that was the positive end of the scale. Here’s the negative end, the Top 11 Worst Engines of the 1980s.

11. 2.8L PRV ZMJ-159 V6: The DeLorean DMC-12’s body was pure Eighties sexiness, with just a touch of exotica. The stainless body, designed by Giugiaro, had seemed to predict the nose of the early Fox mustang and the tail of the 3rd Gen Camaro. But for a car that the father of the Pontiac GTO designed, the car had absolutely no guts. The “PRV” stands for Peugeot, Renault, Volvo…not quite the manufacturers that came to mind for performance in the 1980s. It was rated for 150hp in Europe, but was choked to 130hp for the U.S. market. Seeing “serious shit” at 88mph? That probably meant when the rods would come out of the block.

10. LQ8/LQ9 GM “Iron Duke” I4: Average hp: 87. Average ft/lb torque: 127. Average disappointment finding one in your vehicle: high. This sad little four cylinder found it’s way into plent of GM products, as well as AMC’s, Jeeps, and the Grumman LLV (that boxy thing that replaced Postal Jeeps). And let’s not forget two highlights: In the Pontiac Fiero, it was a firestarter, and in the Camaro and Firebird, was the icing on your disappointment cupcake. There is nothing sadder than a Camaro with only 90hp.

9. GM 267ci V8: At the end of the Seventies, manufacturers were downsizing engine sizes in a desperate bid to meet emissions and mileage concerns. The 267 couldn’t do either well, and didn’t share components with other GM engines, so it was killed off in 1982.

8. Ford 255ci V8: De-bore the well-regarded 302, put on a restrictive head design, and delete the manual trans option. Yeah, that was a great package for the new Fox platform. To put this into perspective: This is the lowest V8 rating for the Mustang ever, and was only 5hp better than the Mustang II’s 2.8L V6. Luckily, Ford learned the same lesson that GM did, killed it after two years, and brought out the vaunted 5.0L V8.

7. Chrysler 318: It’s very hard to hate on Mopar’s small-block. It’s durable. It’ll run on damn near no oil while overheating. However, 5.2L of V8 should be able to produce some semblance of power, not the 150hp lump breathing out of three catalytic converters you could usually find in the Diplomat. However, many a speeder learned that a lot of cops knew how to hot-rod a Chrysler small block, and got the shock of their life when one rolled up on their Corvette like it was nothing.

6. Ford 1.6L CVH I4: When Ford decided that a good, small, fuel efficient but sporty car was needed, they built the EXP, a two-seater Escort that had..uh…interesting looks and a fire-breathing 70hp four. Yeah. The upgrade got you 80hp. The only bright side out of this story? Car and Driver somehow got 44mpg out of a manual-trans EXP during testing, which is on par with a Prius. Guess how this story ended?

5. Maserati BiTurbo 2.5 and 2.8L V6: The idea that Alejandro deTomaso was running things at Maserati should have produced nothing but joy. The man responsible for the Pantera, an Italian supercar with the swagger and strength of a cocky American, was a match made in heaven. The Maser he produced, the BiTurbo, came straight from hell. Nevermind the horrifying quality and the overloaded electronics…if you have to put “reliable and strong if not abused” in the description of an Italian engine, you have failed. No wonder Jeremy Clarkson dropped a dumpster on one.

4. Chrysler 2.2L I4: This was Chrysler’s go-to block, just as the absolutely indestructible Slant Six was in the Sixties and Seventies. Unlike those engines, the 2.2 had a carburetor that was designed to piss off mechanics everywhere, timing that had less accuracy than a blind man’s dart throw, and a distributor shaft that moved enough that it would cause the rotor to snap off, shutting the car down. While it is a stout platform, with most of the design based upon the Slant Six, the execution in early forms was absolutely piss-poor and soured what was otherwise Chrysler’s great comeback from the dead.

2. GM diesels: You can’t pick just one. The Oldsmobile 5.7 V8, the 4.3 V6, hell I’ll even throw in the Detroit Diesel 6.2L …the power levels were pathetic for a diesel across the board for both horsepower and torque. At least the 6.2L was dead-nuts reliable, if underpowered. The 5.7 and 4.3 were based off the gasoline blocks, which meant that even with strengthened blocks, they were prone to failure from the start, and fail they did. Oops. At least the 5.7 can be converted to run on fuel for a killer race block.

1. Cadillac V8-6-4: The last traditional big-block engine from Cadillac, the 368ci V8 was equipped with Eaton electronics to create what they called “Modulated Displacement” to shut down cylinders as they weren’t needed for highway cruising. This was done by a device that would disengage the rockers, allowing the rockers to float while the valves were shut. Good concept? Yes. Bad execution. In the early 1980s the processing power of computers wasn’t up to par and the EGR levels weren’t nearly high enough, so that when the cylinders dropped, the engine pinged like a mother. The solution was to cut the “3rd Gear” wire from the transmission and just run the car like a V8.

Any engines missed? Add your comments below!

The Redneck Video To End All Redneck Videos - Guy Gets Launched From Truck Bed While "Logging With A 350 Chevy" Best of 2014: This 1958 Ford Two Ton Dually Project Is Awesome And Less Than A Grand Asking Price!