Unveiled: The Dodge Charger Hellcat and Scat Pack Widebody – Stage One Of More Performance From Mopar! 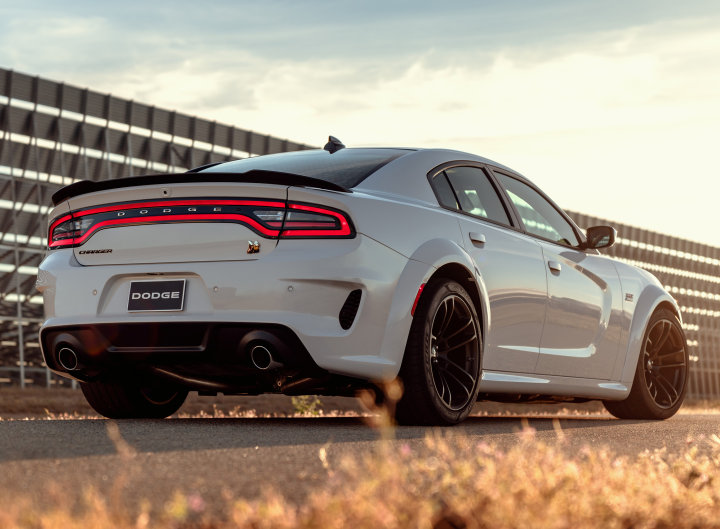 One of the best things to happen to Dodge’s Hellcat twins was the introduction of the Widebody kit for the Challenger a couple of years ago…prior to, the superbeast version of the Challenger had to put down 707 horsepower through 275-series rubber at the rear. To put that into perspective, so did a 1993 Camaro Z28. Which would you rather drive, the 275-horsepower F-car or the 707-horsepower lunatic fringe? Okay, we’re pretty sure most of you would simply choose to annihilate the Challenger’s rear tires everywhere you went, but take it from someone who has dropped the hammer in a Charger Hellcat on the highway: 275-series rubber just isn’t enough, I don’t care how good the tires are. With the Widebody treatment, 305-series tires get shoved onto the car and now, you can have that much more confidence in what the angry feline is doing.

Except, that was only if you had the Challenger. Up until today, the Charger didn’t have that option. Well, now that is a thing of the past: after much speculation and teasing, the Charger Widebody has been unleashed and on the Charger Hellcat, it will be the only option. It will be standard equipment on the Charger Hellcat and optional on the Charger Scat Pack models, and adds 20×11″ wheels on Pirelli 305/35ZR20 rubber, Bilstein three-mode adaptive dampening, and Brembo six-piston calipers and two-piece brake rotors up front. Other changes for the Charger lineup include three new colors: “Frostbite”, “Hellrasin” and “Sinamon Stick”. We haven’t seen any of these shades yet personally, but just the fact that they are bringing out colors with names that would fit right in with the 1970 High Impact lineup works for us.

Directly from FCA comes all of the explanation you need: “People say, ‘no one wants cars anymore.’ I would tell you that the 40,000 people who bought a Dodge Charger so far this year would probably agree, because to them, the Charger isn’t just a car. The Charger’s reach extends beyond body-style practicalities and it can’t be defined by average industry shifts,” said Tim Kuniskis, Head of Passenger Cars – Dodge, SRT, Chrysler and FIAT, FCA – North America. “Can you buy a vehicle that is dollar for dollar more practical than a Charger Widebody? Absolutely, but there are also more than 1,000 flavors of ice cream and vanilla is only one of them. If the ‘average’ person will own six cars in their lifetime, our cars need to connect so strongly that people can’t help, but turn around and take a second look before walking away.”

Not announced: Charger RedEye. But during a press briefing, Kuniskis mentioned that the Widebody program was “step one” of bringing the twins of evil into identical forms instead of favoring just the two-door. 797 horsepower from a four-door sedan. Long live horsepower.

3 thoughts on “Unveiled: The Dodge Charger Hellcat and Scat Pack Widebody – Stage One Of More Performance From Mopar!”