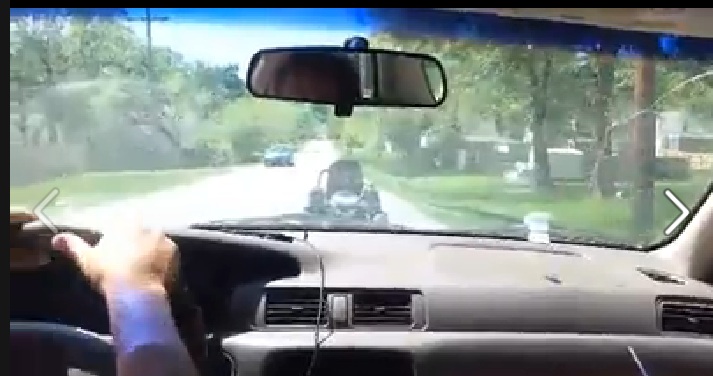 That lead photos is not exactly what it appears to be. Sure, there’s a car load of guys driving behind what looks to be a zero turn industrial lawn mower that has made a jail break and it cruising down the street to some sort of freedom…or massive impending doom. The reality is that the mower is being steered and throttled by the guy in the passenger seat of the following car. He has control of the machine and frankly, their plan for hilarity works out even better than they could have planned it.

The giggling crew makes it a fair distance down the road before the guy filming in the back notices that someone had stopped their car (which was traveling in the other direction) and got out. The guy then sprints like Carl Lewis after the mower and jumps on, trying to stop it. The boys in the car make it interesting for the guy when they decided to steer it while he’s wrestling to stop it. The guy is clearly confused as to what in the hell just happened, especially when he walks up to and ultimately past the carload of people who are laughing harder than Jerry Lewis fans in France. The line of the whole deal is when one of the pranksters says to him, “Hey man, you almost went the full 8-seconds there!” (A reference to bull riding).

Are we off base here or is this one of the funnier things you have seen in a while? Of course it is dangerous because if they actually lost the handling on the mower, it could do some damage. We don”t know if they pulled the blades off of the actual cutter or not, but those things weigh several hundred pounds, so if it managed to fall over on the rider he’d have been in trouble. Hey, we’ll admit to really cracking up over this thing. You?

This Newsreel Footage From The First Indy 500 Shows How Much Of An Insane Calamity It Was Nomex Split Loom! This Stuff Will Make Sure None Of Your Wiring Melts Under The Hood!