BMW Takes Flight, No Dixie Horn Needed – An Incredible Jump From The Viru Rally In Estonia 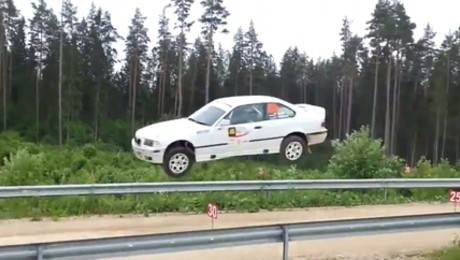 You’ve gotta love rally. Insane speeds while driving like a maniac over any surface you can think of with a screaming passenger just sounds like a load of fun. It’s great to watch and a riot to participate in. But like any sport, there are those who can play, and those who can really play. Like in lots of racing, the major difference between the two groups is the size of the “courages” the driver has.

This video is from the Viru Rally in Estonia. Priit Koik and Alari-Uku Heldna were going for broke in a BMW when they encountered this jump. Instead of slowing down and just hopping it, the pair instead launched the car as far as they could it seems. While the flight looks good and they drove out of it perfectly, the BMW was forced to retire shortly thereafter.

Press play and hang on for dear life!

2 thoughts on “BMW Takes Flight, No Dixie Horn Needed – An Incredible Jump From The Viru Rally In Estonia”