Bristol Goes Dirt: Look At What It Takes To Turn One Awesome Paved Oval Into The Ultimate Dirt Oval 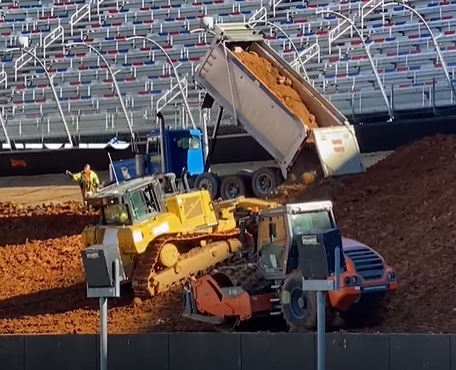 When the first Bristol dirt race was announced, there hadn’t been anything that exciting for NASCAR in years. It was a genius move. But while everyone was excited about the thought of the great dirt racing that would happen, you couldn’t help but wonder just how in the hell they were going to pull off covering the entire race track in dirt, and then more importantly get it all back off! Hauling dirt in and dumping it out of trucks is a big task, as is spreading it around evenly on the track, but picking it all up so it doesn’t look like it has every been there is an even bigger one. But boy do we love the result!

In this cool video from the team at NASCAR you’ll see just what it takes to transform Bristol into the ultimate dirt track. From one of the most famous paved circle tracks in history, to one of the most famous dirt tracks in history, that has to be some kind of record that no other track has come close to reaching. Watch the video, marvel at the amount of dirt, and applaud the team of folks who put this whole circus together.

Sixual Healing: Back In 1989 The Toyota Camry Got A V6 To Fight The Taurus and It Was More Noise Than Action The Biggest Funny Car Field In History? 70 Floppers Arrive At The Texas Motorplex For Funny Car Chaos