Incredible Video: This 1942 Film Takes Us From Casting To Finished Product At A Curtiss-Wright Airplane Engine Factory 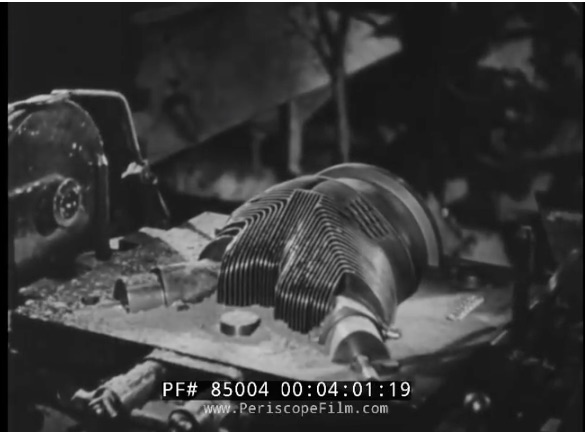 This is the coolest engine building video we have ever found and showed you. Why? It is the start to end process of building Curtiss-Wright Cyclone radial airplane engines during WWII. We get to see the guys in the foundry making the sand molds, we get to see machining operations, assembly operations, and we get to see just how much of this work was done by human beings…all of it.

Curtiss-Wright experienced the type of insane growth and expansion during the early 1940s that few other industrial entities in the country could have handled. They went from a single factory to five factories in the span of less than two years. Their engines were what were powering so many Allied aircraft, aircraft that would be shot at, shot down, and shot up, that they needed to build engines at lightning pace. The way you did that in the 1940s was to get more people, get more material, and get more machines.

Hell, we even get to see the freaking tool makers, guys who are made into heroes, highlighted as the guys who make the things that determine the overall quality and finish of the engine. It made the hair on our neck stand as we watched and heard how the workers are talked about and respected.

This is literally the coolest engine video we have ever seen. Not just because of the stuff we see, but the way it is shown, explained, and celebrated. Just fantastic stuff that is worth every minute of your time.

The Most Unique Flat Track Motorcycle Race In America Is Not Flat At All - The Peoria TT Is As Radical Now As It Ever Was Snow Kiddin': This Kid's Dad Built Him A Hot Rodded Power Wheels Plow Rig!

2 thoughts on “Incredible Video: This 1942 Film Takes Us From Casting To Finished Product At A Curtiss-Wright Airplane Engine Factory”