Christmas Caroling, BangShift-Style: Punching A Trail Through The Snow In An AWD 300C To “Carol of the Bells” 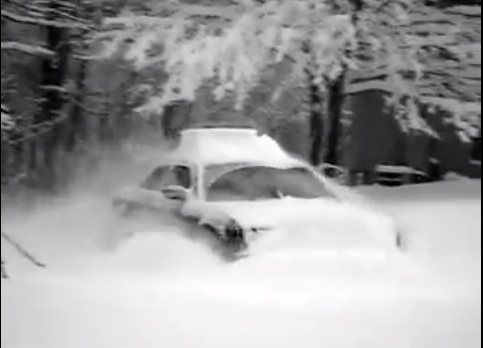 Regardless of whether or not a metric ton of snow fell overnight, sooner or later you’re gonna have to go out in it. A good snowblower will take care of your driveway and maybe the first couple of feet into the street but nobody wants to clear the entire street of snow…that’s the job of the guy with the plow, or the city workers. Besides, if you live in the woods on a dirt road, a plow might not be your best bet. If you live in Nunavut and can just drive your snowmobile…well, uh…hey, can you send me one of those bear-shaped license plates?

When over 13 inches of snow fell a couple of years ago, the owner of this Chrysler 300C decided the best way to plow through the snow was to put a good set of snow tires on the sedan and to just drive through it. The AWD Chrysler doesn’t seem to have a single hiccup as it bashes it’s way through the drifts, and just because that wouldn’t be neat enough, we get the classic “Carol of the Bells”, a timeless Christmas classic.

Question Of The Day: Could The 1964 Barracuda Have Outdone The Mustang If Plymouth Hid It's Origins Better? PRI 2014: MUST SEE! Holley's HydraMat Just Changed The Fuel System Game In A Big Way!

2 thoughts on “Christmas Caroling, BangShift-Style: Punching A Trail Through The Snow In An AWD 300C To “Carol of the Bells””