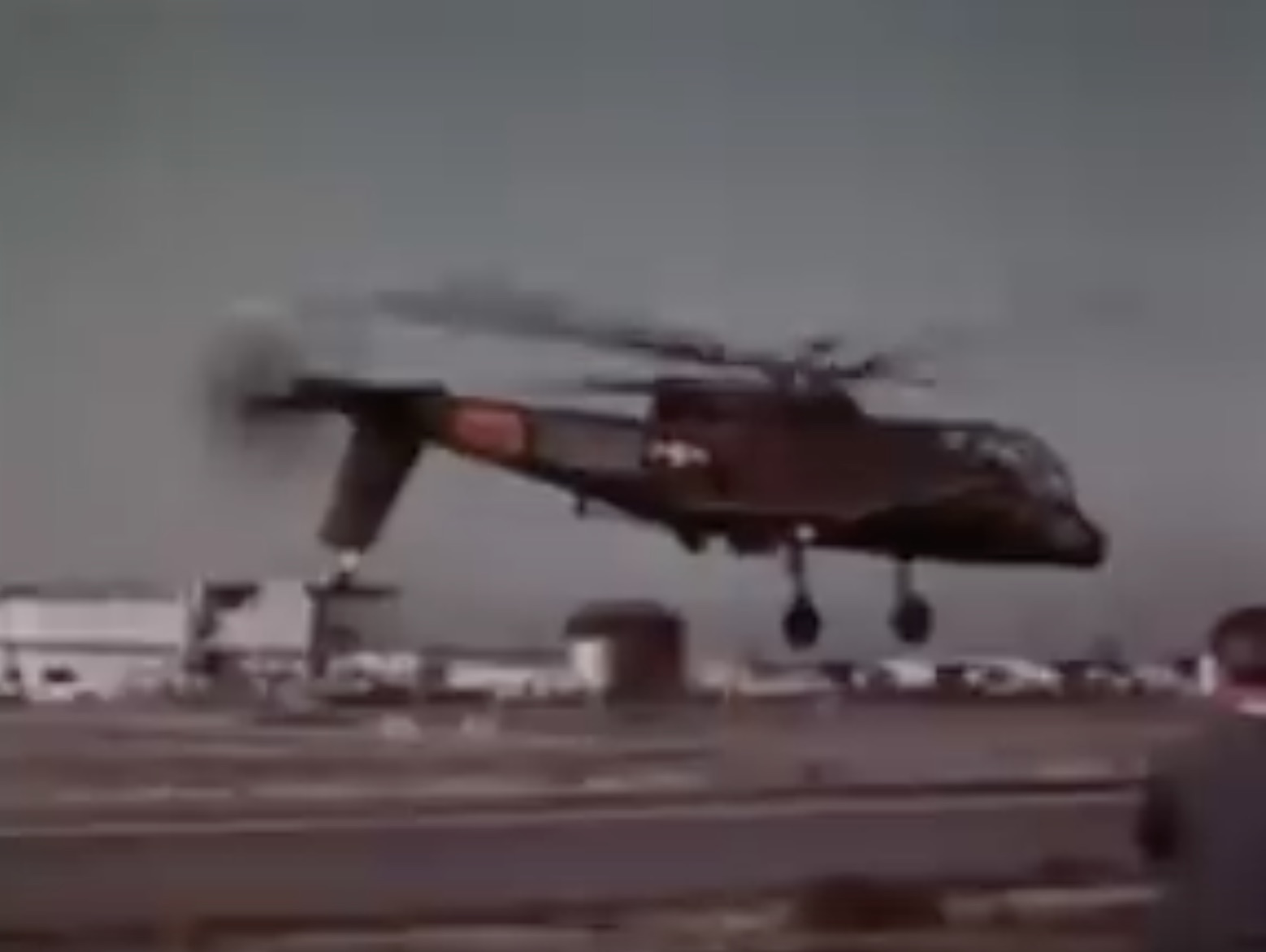 Arming helicopters was a relatively new thing when the 1964 Advanced Aerial Fire Support Systems (AAFSS) program was announced. Up to that point, any armed helicopter was a modified version of an initially unarmed form…think the difference between the UH-1 Huey and the armed-up “Hog” versions that packed guns, rockets and grenade launchers, among other forms of weaponry. There wasn’t a purpose-built flying tank…even the vaunted AH-1 Cobra didn’t appear until until 1965 and it itself was also part of the AAFSS program, a quickly approved interim gunship platform that to this day still exists in the form of the twin-engined AH-1Z Viper that the Marine Corps uses. It worked fine and was one of the Vietnam War’s most impressive contributions, but it wasn’t enough. Per the AAFSS request, the new helicopter had to cruise at 195 knots, have a burst speed of 220 knots, and the ability to hover out of ground effect at six thousand feet on a 95 degree Fahrenheit day. That’s asking quite a bit out of a helicopter, but out of all the entrants, two were selected to go into the Project Definition Phase: Lockheed’s Cheyenne and Sikorsky’s S-66, which featured a device they called a “rotorprop”, a tail rotor that could rotate 90 degrees and turn into a pusher prop. In November, 1965, Lockheed won the AAFSS contract and work started on the ten early production Cheyennes.

The AH-56A was an unusual helicopter, to say the least. A single-engine, compound helicopter, it ran three rotor discs: the main, the tail rotor and the pusher prop. The idea behind the design was that at higher speeds, the pusher prop and the stub wing lift would reduce the aerodynamic load on the main rotor and would be able to fly at over 200 knots. It could be rigged to carry TOW missiles, 2.75″ Hydra rockets, and would have the firepower of 7.62 minigun or a 40mm grenade launcher at the nose and a 30mm automatic cannon on the belly. The gunner, who sat furthest forward, had a chair and sighting systems that spun with the barrel of the gun…meaning that the pilot was looking in the same direction that the barrel was pointing at.

So, what happened? Why is the Cheyenne just a footnote in aviation history? Well, there were problems. On March 12, 1969, test pilot David Beil died when the rotor on one of the helicopters slapped the canopy during a test flight that was trying to get an oscillation problem sorted out. In April 1969, the Army sent a “cure-notice” to Lockheed with a list of eleven technical issues that needed to be fixed. The Army cancelled a production contract that May due to concerns of meeting a production timeline, and during wind tunnel testing that September, one of the prototypes broke apart after a botched test induced dramatic oscillations, causing the rotor to strike the tail boom and ultimately causing the helicopter to break up. Then the Air Force started crying foul, claiming that the Cheyelle infringed upon their role of close air support (something that had been agreed upon in the 1948 Key West Agreement). But the final nail in the coffin came during a weapons demonstration in early 1972. When the order was given, the first TOW missile fired…and lawn-darted straight to the ground. Nevermind that 130 TOW missiles had been fired before just fine, and nevermind that the second missile worked perfectly, the final cut had been made. On August 9th, 1972, the Secretary of the Army cancelled the Cheyenne program altogether.

Hail To The Chief: The Perfect 1982 Jeep Cherokee Chief Is Available! Shreddy Life Is Building A Class 11 Volkswagen! This Is The Gnarliest Class At Baja Period