Classic YouTube: This 1964 FAA Controlled Crash Test Of A Douglas DC-7 – When You Must Be Certain Every Safety Feature Will Work… 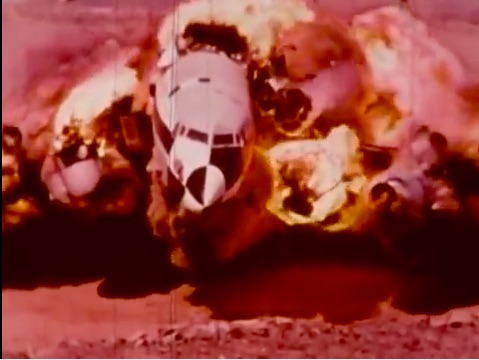 Deer Valley, Arizona, a suburb of Phoenix, has a rather grim history in the aviation world: for quite some time the FAA used the Deer Valley Airport to perform aircraft crash testing. The goal: to determine how to prevent fatalities and reduce injuries in what would be a marginally survivable airframe accident. To test the theory, the FAA constructed what was a perfect storm of destruction: barriers to knock out the engines and landing gear, two phone poles to simulate trees, and two earthen berms to induce heavy crash loads. Two aircraft were picked for the suicide missions: A Douglas DC-7 and a Lockheed Constellation. Both aircraft were rigged with the latest and greatest (and some experimental) testing equipment and features, ranging from cargo containment and child restraint systems to airbags and fuel gelling systems, hooked to a 4,000ft steel rail, and with throttles wide open and nobody in the way (minus, according to legend, a random motorcyclist during the DC-7 crash who escaped unharmed) the airframe was sent to it’s doom.

This is the footage from the DC-7 crash, which took place on April 24, 1964, and it’s unique not only for the dramatic footage but because the crash did not go to plan…like crashing an airplane ever does. What happened is that the DC-7 cleared the second impact hill in a spectacular fashion (some say it was due to the airframe traveling faster than anticipated, other sources say the launch moment was due to a mound of dirt shortly after the track ended) and the airplane takes one last flight in a blaze of glory before crashing down into the desert floor. The fire was due to 15 gallons of fuel and engine oil and did not affect the aircraft in any form. Two surprises were found post-crash: twelve of the sixteen dummies stood a good chance of surviving the crash, which bogged the minds of the investigators, since the DC-7 had wadded up like a Coke can. The results were used to strengthen seats and fuel tanks, while the footage was released to the public, well against the objections of the Air Transport Association, who didn’t want the footage shown because they believed it would spook the general public.

Working For A Living: What Do Top Fuel and Nitro Funny Car Crews When The NHRA's On Hold? At Kalitta Motorsports, They Work! What's Social Distancing? 1967 Checker Aerobus Eight-Door Throws That Idea In The Trash!

One thought on “Classic YouTube: This 1964 FAA Controlled Crash Test Of A Douglas DC-7 – When You Must Be Certain Every Safety Feature Will Work…”