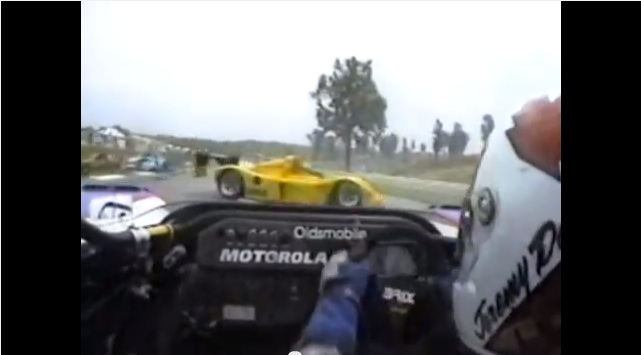 One of the most notable crashes that has ever taken place in IMSA racing was the incident at Road Atlanta involving Jeremy Dale and Fabrizio Barbazza during the Rain-X/Motorola Grand Prix of Atlanta race. The notable, if not infamous, part of the wreck is that Barbazza’s Ferrari 333SP was split in half after being violently hit by Dale’s Oldsmobile WSC. The Grand Prix was to have a mix of GTS-2, GTS-1 and WSC vehicles on track at the same time, and according to court documents from a lawsuit Barbazza brought against IMSA, there were concerns from the drivers about the pace of GTS-2 cars versus the WSC cars, and concerns involving the tire barriers. However, on April 30th, 1995, the cars took to the field and it was quickly apparent that the WSC cars were seriously outpacing the GTS-2 vehicles. Twenty minutes into the race, the accident occurred: GTS-2 driver Joe Cogbill tapped GTS-2 driver Bill Hendricks, causing both cars to spin into the left tire wall, scattering debris and tires. Immediately behind them were three WSC cars. The first WSC made it past the scene of the accident. Barbazza spun out while trying to avoid debris, and spun out. Dale, whose Oldsmobile was doing well over 150 MPH, came around just as Barbazza’s car was sliding backwards across the track and had no time to react before hitting the Ferrari nearly dead-center, ripping the car in half. The race was red-flagged almost immediately. Both drivers suffered injuries that effectively ended their racing careers with IMSA. This is easily one of the most violent wrecks we’ve ever seen, and the fact that both drivers are still around to tell the tale is incredible.

Remember Pearl Harbor Today - 78th Anniversary of Attack Do You Want To Know What This Looks Like From In The Car? Formula Off Road Greatness