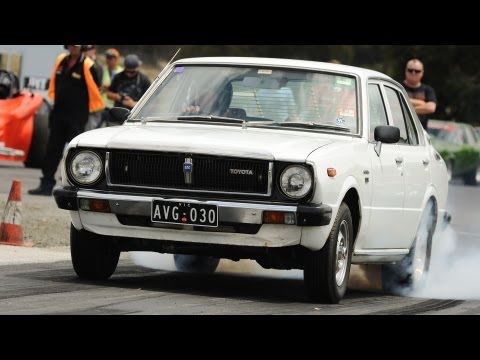 To build a little old Toyota Corolla that runs in the elevens on the strip and looks like something an old woman would be driving is devious and awesome. The car is down in Australia where weird and cool drag cars seem to be growing on trees. From the plumbing van with the 632ci BBC in it or the other clandestine creations, the Aussies definitely know how to make speed on the sly.

This car uses what looks to be an unaltered stock four door body, little slicks that have to be like eight inches wide or less and a turbocharged Nissan engine that fits like it belongs there in the engine bay. The mill is a VG30 V6 with a healthy little turbo bolted to it. The chassis is pretty well sorted too because the car hooks hard, and runs down the track torqued over like the Flintstone’s car with a Brontosaurus rib hanging off the side!

Out favorite part of the whole rig is the fact that the car has a five speed transmission in it and the driver can grab gears with the wrong hand while driving on the wrong side of the car!

Yeah, it is an old Toyota with a Nissan engine, but fast is cool and clandestine fast is even cooler, regardless of how the ponies are being made or what they are sheathed in!

BangShift Sleeper Saturday: THE SECRET WEAPON - A 1980 OLDS WAGON WITH 496CI OF VORTEC BIG BLOCK AND A DOUG NASH 5-SPEED! BangShift Daily Tune Up: Paul Revere And The Raiders - Judge (1969)