Epic Crash Test Video: Throwing A Volvo Off A Cliff In The Name Of Safety! 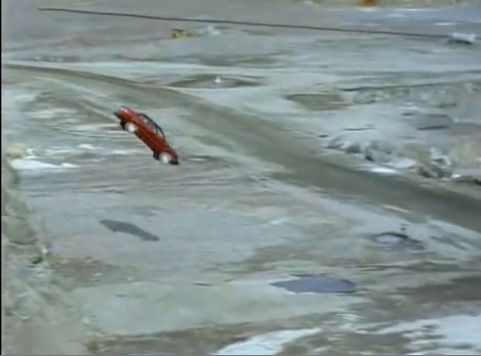 When you base everything your company builds on the backbone of safety first, there will come a time when you have to put up or shut up. Volvo has ridden the safety bandwagon for as long as I’ve been aware of the company, and for longer than that. Many a driveway had a Swedish brick parked there because they were the safe choice. They might have had exactly zero sex appeal, or any real inspiration for the driver, but if your luck was to run out, you stood a better-than-average chance of surviving whatever was about to happen.

I wish I knew what the presenter of this clip is saying, because that would enlighten me as to why this particular Volvo 850 was driven off of a cliff in a mine in an apparent crash test of some sort. There doesn’t seem to be any sort of rigging that propelled the 850 off and over, and the only two clues that this wasn’t a case of someone putting a brick on the pedal are the metal plate that keeps the Volvo from auguring into the ground, and a dirt berm to catch the car as it rolls away from the impact. The driver-side airbag goes off, while the passenger-side dummy gets the soft padding of the dashboard to hit it’s head on. Amazingly, the front end doesn’t accordion all the way to the windshield and it doesn’t bend as much as you would expect it to. You might not plan to drive off of the side of a mountain anytime soon, but at least you might live through the experience if you do!

Click play below and watch another Volvo get sacrificed to the gods of safety!

The Dirty Cougar: That Cheap AeroCat Has Gained One Hell Of An Attitude Adjustment! In It For The Long Run: This Dragster In Uruguay Runs Forever On Alcohol Before Making A Run

8 thoughts on “Epic Crash Test Video: Throwing A Volvo Off A Cliff In The Name Of Safety!”