Escape From Powerline Mud Hole In New York! Watch As These Rigs Fight With One Of The Nastiest Bogs We’ve Seen In A While! 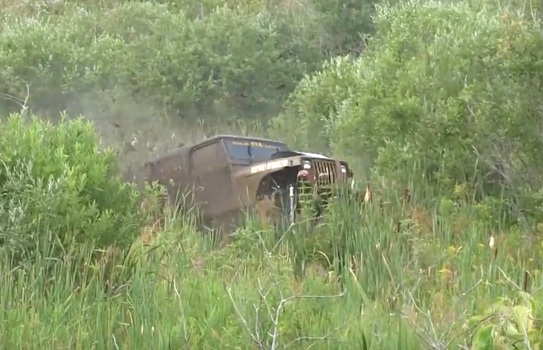 This mud pit just might be the most deceptive one that we have laid eyes on in a while. Why is that? For starters, it doesn’t initially look like a mud pit, but instead looks like an open field filled with green stuff that should keep the trucks going so long as someone doesn’t rip up the ground. But there’s standing water, tons of lush, green vegetation around and cattails…this isn’t just a field, this is about one step above a legitimate swamp. Don’t be fooled, because the second your truck treads off of the safe area, there’s a good chance that your axles are going straight to China and will take the rest of your truck with it if you aren’t careful. Nothing is safe, not even an overkill-built mega truck with tooled-up diesel power and tires that can chew through most anything with no problem. Some trucks come out of here looking like Swamp Thing the first time he rises from the murky stillwaters. Others are lucky they came back at all, given just how far down into the ooze they sank. The story goes that only one rig in this entire batch made it there and back without help, and that the recovery truck died after the first extraction. That’s always a cheerful start, ain’t it? Strap on your waders and click play below!

One thought on “Escape From Powerline Mud Hole In New York! Watch As These Rigs Fight With One Of The Nastiest Bogs We’ve Seen In A While!”