Freiburger And Dulcich Rip Apart A Mercury Cougar’s 351 In The Pilot Episode For “Roadkill Garage”! 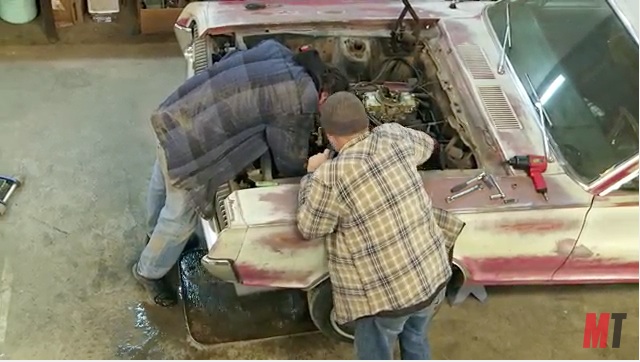 Can you rip out an engine after work on Friday, rebuild it in over the course of the weekend, and dump it back into the car so that you can drive the car to work on Monday morning? That’s the premise behind the pilot episode of Roadkill Garage, which showcases David Freiburger and Steve Dulcich doing “the wrong things the right way”. The Cougar is a car that Freiburger was playing around with last year: it’s a 1967 model that has a swapped-in 1972 351 Cobra Jet backed up to a manual trans, and it sounds sick…not the positive definition, either. The lifters and valves are making an OHV death rattle that needs to be addressed before things go from bad to “I need a beer…” Using the timeline given, the guys rip the 351 out, disassemble it, and find all sorts of lovely surprises, including a wiped cam and a roasted flywheel and clutch. Seems like someone was having a bit of fun with this car! The plan is to do a quickie once-over on the 351, including a dingle-ball hone and new rings, but will the teardown discoveries bury that plan before reassembly? You’ll have to click play below to find out.

Also, Roadkill Garage isn’t going to be a YouTube episode. This is a teaser that is part of Motor Trend on Demand, the subscription service that all of the Motor Trend networks have been pushing for months now. The premise is sound: in addition to shows like Roadkill and Dirt Every Day early, you get the exclusive shows like Roadkill Garage and all sorts of motorsports. If you like it, opt in. If you don’t want to pay, the shows that have been on YouTube will stay on YouTube free, but you won’t get to see Roadkill Garage. Again, the call is up to you.

14 thoughts on “Freiburger And Dulcich Rip Apart A Mercury Cougar’s 351 In The Pilot Episode For “Roadkill Garage”!”