In Car Video: Ride Along On The Fastest 10.5 Inch Tire Pass In Drag Racing History! 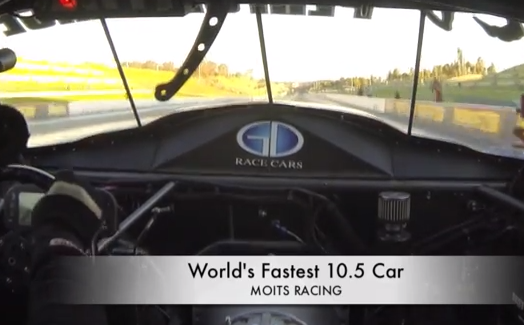 The guys at Moits Racing down in Australia officially lay claim to the fastest 10.5 quarter mile drag race car in the world. Their twin turbocharged Mustang sprinted down the 440-yard course at Sydney Dragway with a terminal speed of 252 MPH, which puts a couple of MPH on the previous mark of 250 MPH set by “Bad Brad” Personett a couple years back. The car cannot be called the quickest though as Brad’s 5.94 pass still holds that title on a 10.5-inch tire.

The run is fascinating to watch from inside the car because the driver really has to be on top of the thing through the middle of the course and as soon as the Mustang settles down enough for him to get a hand off the wheel and on the parachute handle, he does just that and throws the laundry out as the car crosses the stripe. As “easy” as a turbo car leaves in comparison to a blown or nitrous door slammer, it still seems like getting rear ended by a diesel locomotive from this video. It isn’t like the car is lazy off the line, but once the machine gets its sea legs under it at about 100′ down course, it appears as though it goes into warp drive for the remainder of the run.

We’ll continue to marvel at the performances being turned in by these cars as time goes on. It seems insane, but by the time we’re about ready to take the dirt nap in seven decades or so, there will probably be a 300mph door slammer roaming the Earth…or several. Obviously larger tire cars has run faster, but to do this on a damned 10.5? Mother of mercy it is awesome!

PRESS PLAY BELOW TO RIDE DOWN THE STRIP FASTER THAN ANYONE ELSE EVER HAS ON A 10.5-WIDE TIRE!

2 thoughts on “In Car Video: Ride Along On The Fastest 10.5 Inch Tire Pass In Drag Racing History!”