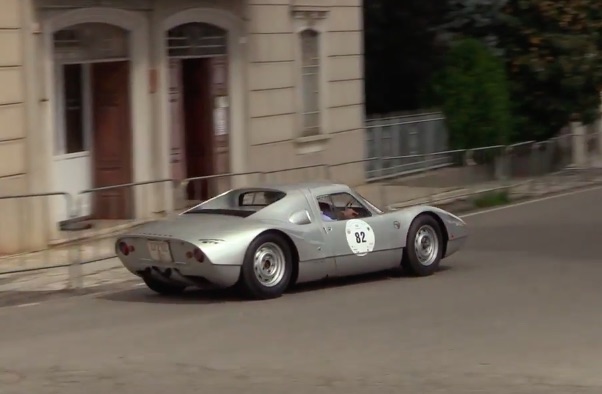 If it weren’t for the silver body and the sound coming from it, you’d swear that this wasn’t a German creation, but an Italian one. Pinched at both ends, scoops and vents all over, and the chopped tail with lights that appear to have been the inspiration for the Lancia Stratos’ tails, it’s very difficult to believe that this is actually a Porsche…at least, as long as you ignore the wheels. This is a Porsche 904…er, due to naming rights, it’s correctly a Carrera GTS. Porsche was jumping back into sports car racing for the 1964 season and decided that the predecessor, the 718, wasn’t going to be enough. Elements of the 718 were used, so it was a rear-engined, rear-drive coupe, but the engine bay was something to behold: Porsche’s 1.5L four-cam inline-four may have been an engineering nightmare to bring to life, but with the goal of getting 70 horsepower per liter, they knocked it out of the park: later versions of this mill produced 180 horsepower and could make the aerodynamically sound little machine scoot. This is the same mill you’d find in a Porsche 550 Spyder, and it was the more successful engine used in the 904…the flat-six from the 911 and the 904’s unstressed, and heavy (?) body didn’t seem to work out, and the Porsche 804 Formula 1’s flat-eight was tried out. Apparently the 904/8, as it was known, had a small problem with, and we’re quoting here, a “disturbing history” of flywheels exploding.

What If They Threw A Race And The Wrong Racers Came - That Happened In England In 1972 - The Rothmans 50,000 What Should Have Been: Footage Of The Chrysler ME-412 Running And Racing

One thought on “Morning Symphony: The Porsche 904 Carrera GTS – That’s How Good Four Cylinders Can Sound!”