May 01, 2016Bryan McTaggartRACING & ACTION, VideosComments Off on Morning Symphony: The World’s Only Street-Legal Ferrari FXX Running At VMax200! 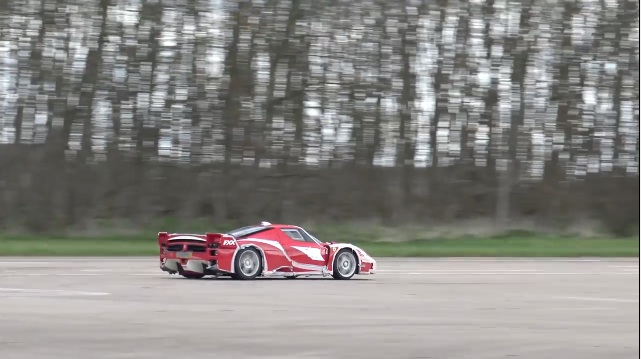 The Ferrari FXX exists because the Ferrari Enzo wasn’t enough of a beast for the company. Think about that for a second. A Ferrari Enzo wasn’t enough. We all tend to write off anything painted red with that Prancing Horse symbol on it’s nose as a toy of the rich, but truth be told, Ferrari was built on delivering performing race cars to individuals who were capable of handling them. Period. Enzo Ferrari was a perfectionist, and the company has had a long-standing policy of vetting their owners. The FXX wasn’t available to buy…instead, Ferrari allowed certain individuals to buy in, but they would only meet their cars at certain venues, where they would be allowed to drive them before Ferrari boxed them back up and took them away. Think of it as one of the most expensive vehicle rental programs anywhere in the world. Except for one British gentleman, that just wasn’t enough. We don’t know how he managed to convince Ferrari to turn FXX #54 into a street-legal machine, but he did. It’s got number plates on it, it’s wearing at least two rolls’ worth of masking tape and it’s making 190 mile-per-hour blasts up the runway at a recent VMax200 event. Far from a typical Las Vegas Rent-A-Supercar, the FXX is pissed off from the moment the start button is hit and the second the pedal is pushed down this thing shrieks, exactly like you’d expect a pissed-off Italian red-head to. This is Ferrari at it’s best: no posing, no mercy. And as for the tape? It’s to help avoid rock chips. Given the kind of cash that had to be spent for this car, we don’t blame the driver one bit.