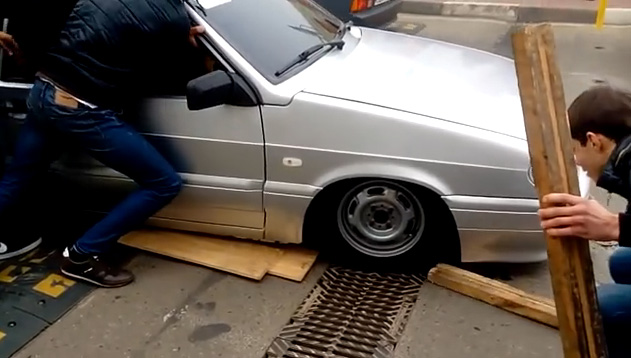 We’ve long been mystified with the culture of “stanced” cars, especially the competitions to see who can pull into and out of a parking lot without scraping the ground. Seriously, look up the videos, you can watch them and be amazed (like us) that it is a “thing” people do. The good news is that it isn’t just American youths lowering their cars to previously untold levels as to render them largely useless. Nope, the Russians are in on it too and frankly, they look more pathetic than the American kids. We’re not kidding and this video is proof.

This looks to be a Russian car club or some sort of enthusiast group heading somewhere in a pack. They are all driving tiny little cars that sounds as though they make about 11 horsepower. The group encountered a speed bump in the road that brought the whole works to a screeching halt and required the use of wood and human muscle to actually get the cars over the speed bump. The best part is that said speed bump is one of those plastic jobs that your hampster can roll its wheel over. It isn’t like this is some huge lump of asphalt in the road designed to trip up lowered cars. Nope, a mouse pulling an ox cart could scale this bastard….just not these little cars.

The best part of the whole thing is how much wood these guys have with them. Seriously, there are 2x4s, shims of varying thicknesses, and none of it does much of anything to air their causes because the cars are so amazingly low that even when they try to bash their way over, the “hot” hatches run aground on the 2 inch tall plastic bump. It looks like a Russian kid version of Washington crossing the Delaware at one point with all the guys just pushing the car over the bump on the unibody/frame. Gotta love it.

Thanks to Al for the tip!