Oh, Boy: The 1994 Hydroplane Blowover Of The Oh Boy! Oberto Unlimited At Tri-Cities! 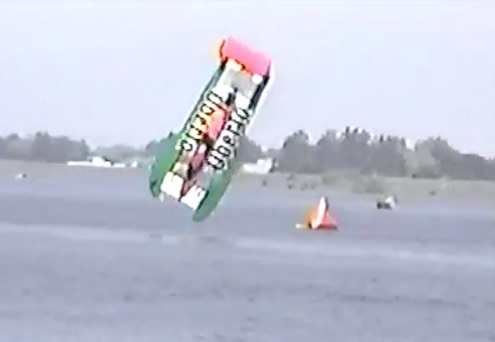 People like Mike Finnegan might disagree with me, but I genuinely do not understand the point of hauling ass on the water. A jet ski could be fun, sure…it’s the aquatic translation of a dirt bike, and I’m pretty sure smacking the water hurts less than broadsiding the nearest Douglas Fir. But boats running big MPH? Nope, not for me. And this is a prime example of the most radical form of why that is a problem: a hydroplane blowover. Unlimited hydroplanes are by nature ballistic…they use the same Lycoming turbine that you find on the back end of Chinook helicopters. 200 miles per hour on a straight run isn’t out of the question. But it’s not the speed so much that’s the problem, it’s how the hydroplane works. The only things that touch the water while it’s on the run are the bottom half of the propellor and sponsons at the front. After that, it’s a cushion of air.

Now, for any fan of NASCAR or drag racing, the answer should be simple: if you are moving fast enough, and enough air gets underneath the weight of the vehicle at speed, what happens? The answer: a blowover. And it doesn’t matter if it’s on the asphalt or in the water, at triple-digit speeds it is all bad news. This footage is from the 1994 Columbia Cup, held in Tri-Cities, Washington, and will show Mike Eacrett’s flight in the Oh Boy! Oberto hydroplane before it smacks the water like the bellyflop from hell.

I’ll stick to floating around at a very lazy speed, thank you very much.