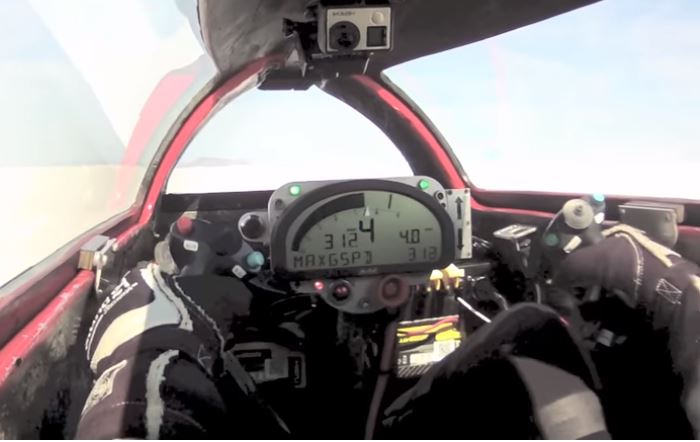 Streamliners can be really scary. Valerie Thompson found that out when she crashed yesterday at Lake Gairdner in Australia during their Speed Week. She is okay. When streamliners crash, and they do, they sometimes end up sideways in what is referred to as a pencil roll. The g-forces involved at that point tend to be more than the human body is comfortable with. This can lead to serious injury or death. This is one of the major concerns with streamliners, whether two wheeled or four. Luckily for Valerie Thompson, her parachute kept this from happening and likely saved her from injury or death. In fact, she walked away from the crash on her own. The video below shows that crash. Pay attention to the parachute coming out, the car crashing to the ground and the fact that it landed on its roof at least once before ending up on its side and sliding for well over a mile before coming to a stop.

Major kudos to the team, the safety equipment, the safety workers and emergency personnel, and Valerie for being the professionals they are. No word is out as to the extent of the damage to the motorcycle, which has carried Valerie to the top of the heap with regards to women riders. She is the fastest woman on a motorcycle and the team was in Australia attempting to become the fastest motorcycle on earth, period.

We’re sure they will be back after making repairs, and we hope to see them in August at Bonneville. To see just what it is like inside this machine at speed, we have a video below the crash that is from inside the cockpit with Valerie on a run from 2016. It’s amazing to watch.

Gluttons For Punishment: Go For The Ride-Along With Alex Roy And Zach Bowman On Their 2015 Morgan Cross-Country Jaunt! We Think The 1988-1998 CK Series Of GM Trucks Will Be The Next One To Trend. What Do You Think?