Roadkill! Dodge Has Sponsored The Misfits And Entrusted Them With Two Hellcats And A Viper – Carnage Ensues! 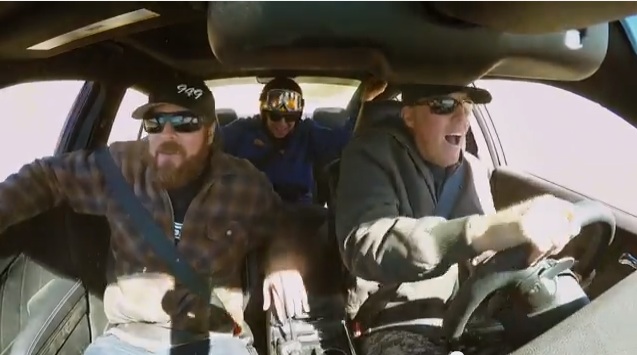 Ever since Freiburger and Finnegan started teasing out info that involved Roadkill, Dodge and something involving Hellcats and a Viper, lots of people have been waiting with baited breath to see just what the hell happened that had the cars dirty, the drivers dirtier, and both of them wearing shit-eating grins. These are new cars…granted, three of the most bad-ass rides out of new sponsor Dodge’s catalog, but it’s Roadkill. New cars aren’t normally welcomed…so what happened that changed all of that?

On the plus side, Dodge’s sponsorship of Roadkill means that David Freiburger and Mike Finnegan can continue to live the dream life making videos we absolutely love for at least another year. They won’t make the show all-Mopar, they won’t force them to drive new junk all the time and are even kicking in some extra dough so that the dynamic duo can have some kind of big meet-and-greet later on. That’s sweet!Somewhere in the middle of all of this sponsorship talk, however, a Dodge employee left three sets of keys lying around, unguarded. And most of you already know exactly what happened: they roped in Carlos from Motor Trend and Fred from Dirt Every Day and proceeded to inflict so much abuse to the two Hellcats and one Viper that even PETA was notified about the beatings. They had racks of Pirellis mounted on wheels ready to go, impact wrenches and jacks nearby to replace shredded rubber, and short of slamming them full-steam into a wall, they tried it all. And the whole time they are laughing like maniacs…sincerely, their laughter is kind of worrisome as they rally the Charger around a motocross track and when Freiburger suggests that even without a dyno they can still “strap ’em down”, the tone of his voice sounds both exceptionally evil and impatiently happy, like Christian Grey with a moronic office assistant. They even put a warning card in the film, for those who might cringe at a new car being flogged like a cheap rental. Hey, somebody has to beat the holy hell out of a Hellcat, and who better than these two?

Here's 15 Wild Wheels Up Launches From Memphis - Which One Is The Craziest? 2015 Buffalo Motorama: Old Iron, Cool Iron, and Neat Stuff At The Big Show In Buffalo

13 thoughts on “Roadkill! Dodge Has Sponsored The Misfits And Entrusted Them With Two Hellcats And A Viper – Carnage Ensues!”