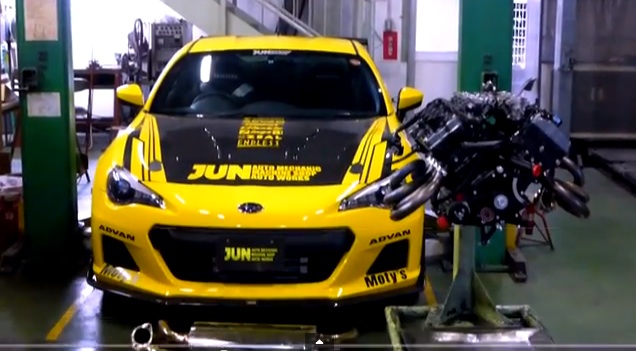 The Subaru BRZ is a cool little piece that, along with it’s Scion FR-S/Toyota 86 twin, is meant to be a return to the small, lightweight and tossable rear-wheel-drive coupe that Toyota used to build. It’s a decent coupe, but one thing that the entire platform has been criticized for is a distinct lack of power from the 200hp 2.0L boxer four. Originally meant to be just enough power to have fun, it hasn’t been enough for the enthusiasts who have clamored for a turbo or a supercharger. While those options haven’t come to fruition, JUN Auto, a Japanese tuner, has found one very novel way of making the BRZ more lively.

They start by ripping the flat-four out and replacing it with a 2.4L V8 that, simplified, is two Kawasaki ZX-12R four-cylinders mated together, which creates about 362 HP and can rev to 11,000 RPM with no issues whatsoever. Hearing this thing on a dyno is sweet, but listening to it tear around a track is another form of beauty altogether. The music is annoying and all of the writing is in Japanese, but the engineering behind this car is awesome and the noise it makes is otherworldly.

Ebay Find: A VW Westfalia Camper With A Small-Block Chevy Powering It - It's Even California Legal! Love Small Tire Drag Racing? Small Tire Nation Has A Massive Calendar Of Events From Across The Country