The One, And Only, Riva Aquarama Lamborghini May Be The Sexiest Boat Ever Made 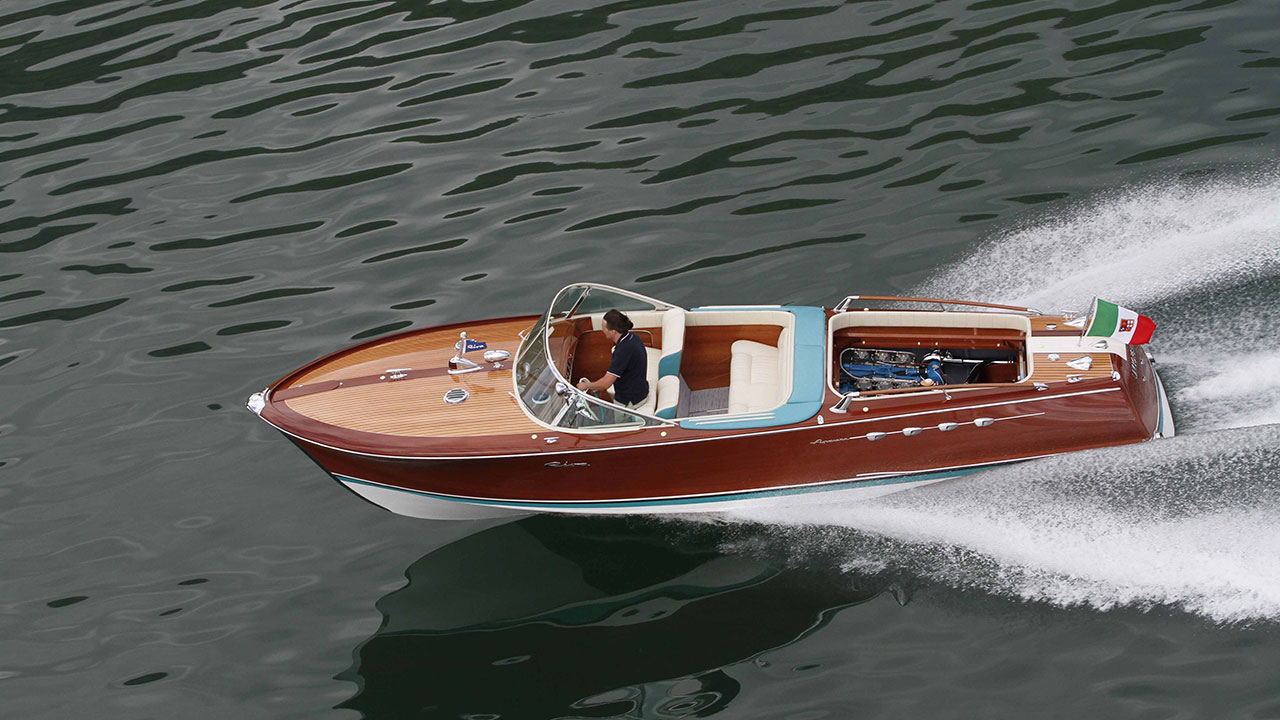 It’s the 1960’s in Italy, Ferrari is the Lord, God, King of automotive and racing in Europe. But, other Italian car companies  were no slouches either, Fiat, Alfa Romeo and even Lancia were well respected in their own right. In 1963, an Italian tractor builder decided to get into the super car market. Ferruccio Lamborghini had a passion for automobiles since he was a young man modifying and racing Fiat Topolinos after WWII.

Lamborghinis was quickly gaining a reputation building world class grand touring automobiles. Their rear engined V12 monsters, which were named and inspired after famous fighting bulls of Italy and Spain. Sales grew as well, even though Lamborghini officially stayed out of racing, unlike Ferrari.
At the same time, an Italian boat designer, Carlo Riva, had a reputation for building world class runabouts in gorgeous mahogany. The Riva Aquarama was one of the most sought after water craft of the 1960’s and had been purchased by the rich and famous. It’s design was an instant classic and has stood the test of time. Riva continued to produce the Aquarama from 1962 all the way into the 1990’s. The Aquarama was a 27 foot, twin engine beauty. They were known for their unique wrap around windshield inspired by the Cinerama large format movies of the 60’s.
In early 1968, Ferruccio Lamborghini came to Carlo Riva to commission an Aquarama for his personal use. But, there was no way Ferruccio would accept his boat being powered a pair of GM based V8’s. Lamborghini put together a pair of his V12’s that were powering the 350 GT of the time and modified them for marine use. One of which was built to run in reverse rotation. They were officially rated at 350 horsepower each. Soon after, Lamborghini took delivery of his personal Aquarama, hull number 278. The result was the fastest Aquarama ever produced. Hitting speeds of over 48 knots, about 60 mph.
Lamborghini kept the boat for more than 20 years before selling to a family friend in 1988. The new owner wanted to use the boat, but the cost of upkeep on a boat powered by a pair of Lamborghini V12’s was understandably high. He had those engines replaced with the standard V8’s Riva was using at the time, presumably marine Chevy 454 big blocks. The original marine V12’s went back to Lamborghini’s museum.
The new owner passed away in 1993 and this is where the legendary boat was got lost. The family wasn’t much interested in the old boat, and it was put away to be forgotten about. A story us gearheads have heard quite often. That was the end of the story until 2011 when a Dutch collector of Riva boats went looking for hull number 278. This collector finally found the boat sitting under a tarp near Punta, Italy. A deal was made, and the third owner took possession, shipping it to the Netherlands where the boat went under a 3 year restoration.
The video below shows the story of this famous beautiful boat, and also shows its restoration. It ends with water testing on Lake Iseo in Italy.

We post a lot of engines getting dyno tested here at Bangshift, but a video of a Lamborghini V12 in marine spec is not the usual faire.

The last bit of this boat’s story we could find was in 2015 when it was up for sale. The asking price was not listed, but it was told it had an insurance value near $3,000,000. Another note, is that the boat did have engine covers with a sun pad fitted when it was originally built, but it was almost always seen in pictures and videos with those covers off, showing off those gorgeous V12’s. We can relate to that. 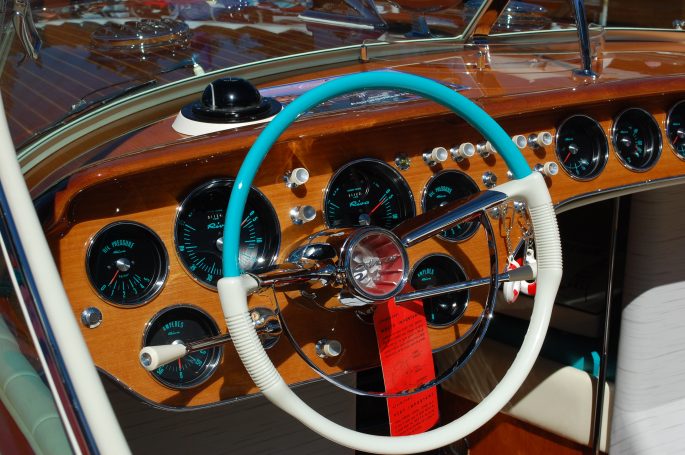 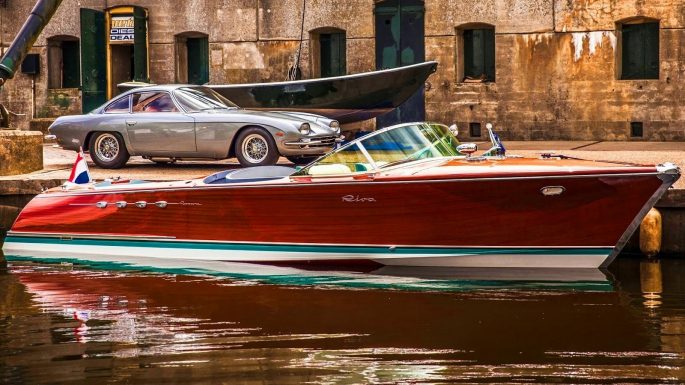 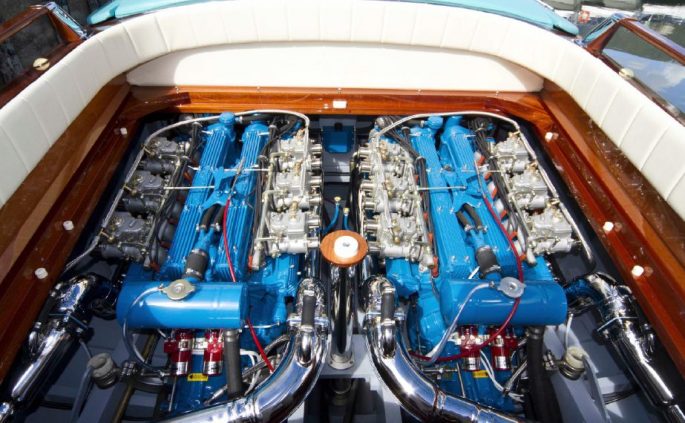 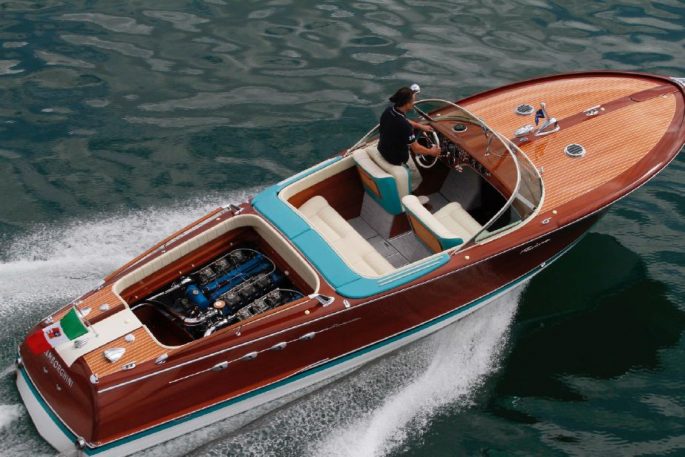 3 thoughts on “The One, And Only, Riva Aquarama Lamborghini May Be The Sexiest Boat Ever Made”