The Smoking Tire Checks Out A 575 Horsepower, Built To The Nines Jaguar XJ8L! 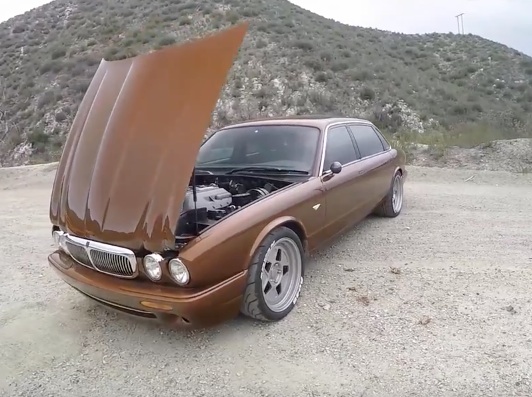 I don’t care what Karl, the owner of this Ipanema Brown Jaguar XJ8L says, thirty-five grand is not a budget build. If it is to him, so be it. But that is the only thing that I can nitpick about Karl’s car. I always did like the looks of the Jaguar XJ, more than the typical German sedan. They didn’t look like an absolute tank of a car…they looked light, like they would be playful and romp around. Was it reality? Couldn’t tell you for sure, but I see more late 1990s and early 2000s Mercedes Benzes and BMWs than I ever see Jags from the same era. They weren’t particularly awful off of the floor, but they were long in the tooth and the performance wouldn’t knock your socks off unless you opted for the supercharged XJR version.

Karl is a man whose vision I can admire. He looked at a dirt-cheap XJ8L online and thought, “That’s the car for me!” Underhood, the AJ-V8 was launched into the bin in favor of a Lingenfelter-massaged GM LS3, hooked to a T-56 that is equipped with a gated shifter. There are small body mods, details that the camera doesn’t catch, and the wheels…well…they aren’t for everyone, let’s leave it at that. But the noise that this Jaguar makes, combined with it’s near-sleeper status, calls out to me. How about you?

5 thoughts on “The Smoking Tire Checks Out A 575 Horsepower, Built To The Nines Jaguar XJ8L!”