The Sound Of Money Disappearing: The Ferrari 250 GTO Crash At The 2017 Goodwood Revival 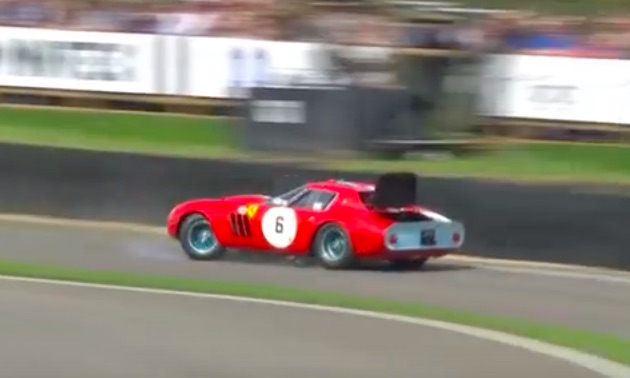 The value of a Ferrari 250 GTO currently lies between $48-$70 million. Each of the 36 production cars are different, each are beautiful, each are eye-wateringly expensive, and any time any owner decides it’s time to part ways with one of the Prancing Horse’s machines, speculators start spitting out big-time numbers as if they’re trying to drum up hype for the next Mega Millions jackpot. And you’ll need that jackpot if you ever want to get close to one. But would you actually use the car like Enzo hoped you would, like he pretty much demanded that you would? Remember, each and every car was only sold to someone vetted either by Enzo himself and, if you were in North America, Luigi Chinetti, Enzo’s direct contact and Ferrari importer. You had to be approved to shell out the $18,000 or so that it would take to buy the cars brand new. Translated into 2019 dollars, that’s about $150,000…not bad money for the car, but still a chunk of change. Knowing that the return on investment might be the most solid ever for a motor vehicle, would you ever start the engine?

The Goodwood Revival races are fantastic for bringing out some of the most desirable and downright expensive machines. Cars from yesteryear with pedigrees get thrown around the track in proper racing styles…no putting about “racing”, you’ll see Stingray Corvettes sideways, Mini Coopers driven as if the cops are chasing and the finest Euro machines wailing down the open stretches. In the 2017 Revival, however, you could’ve actually heard the sound of millions of dollars impacting the tire wall during a practice event when Andy Newell’s 1964 250 GTO Series II wound up tail-end-first after he made a move to avoid another Ferrari that was deep in the brakes. It hurts to see a machine get wrinkled up like that, but Enzo would’ve just had the car brought back to the shop to get fixed back up for the next race.

BangShift's Question Of The Day: Which Of These Two Cars Represents The 1970s More? Canadian Largess: This 1988 Peterbilt 379 Has A 4,000hp Compound Turbocharged C15 Caterpillar In It!

4 thoughts on “The Sound Of Money Disappearing: The Ferrari 250 GTO Crash At The 2017 Goodwood Revival”