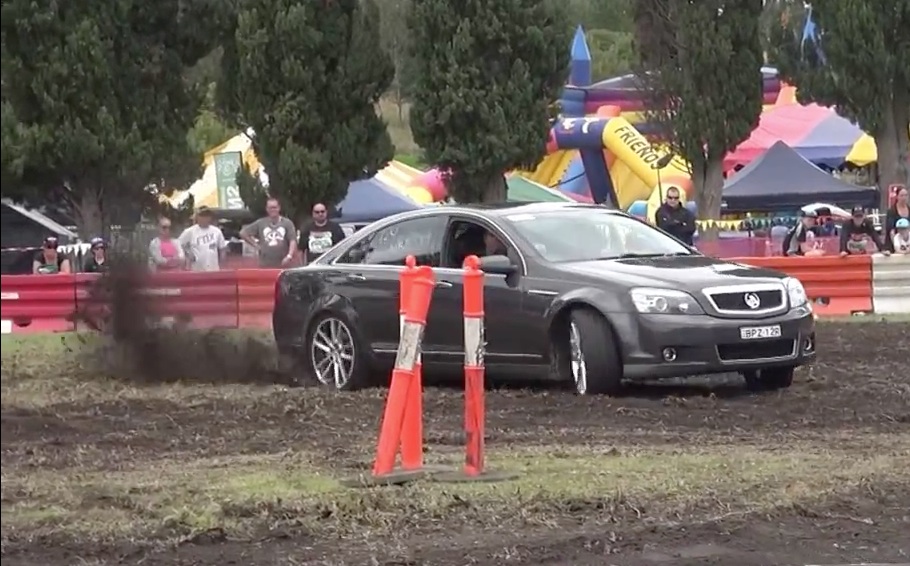 There’s a reason that I’m so enamored with Australian motorsports, even at the grassroots levels: these guys don’t baby their cars! We’ve seen their drag racing, which is on-par with anything you’ll find in the States. We’ve seen their burnout contests, which truthfully isn’t contested outside of world record attempts, parties in the country that have the cops coming, or the one time a year that Powercruise comes to Brainerd. But there is more than just burning nitro and burning tires Down Under. Take a look at this Holden Caprice. Does it look familiar? If not, squint a little bit and imagine a cop’s light bar on top and it will come to you…yep, that’s the Aussie version of the Chevrolet Caprice PPV! Ever wonder if Roscoe P. Coltrane could work with a newer car than his 1977 Plymouth Fury? Take a look at this big beast work! I don’t know how fast the start-stop competition was meant to be…Aussies, a little help, please…but it doesn’t look out of shape at all. The rallycross-like deal looks like a blast, and the big Holden doesn’t seem to be bothered in the least to swing it’s tail out. Something tells me that ol’ Roscoe would’ve liked his new cruiser just fine.

Get An Ant's Eye View Of What It Is Like To Be Run Over By A Junior Fuel Dragster Wanna Beat The Snow Once And For All? Then Look At This Chevrolet Blazer...uh, Plymouth Acclaim?