The Frozen Shift: In Car Video Of A Guy Rowing A Four Speed In Iceland! 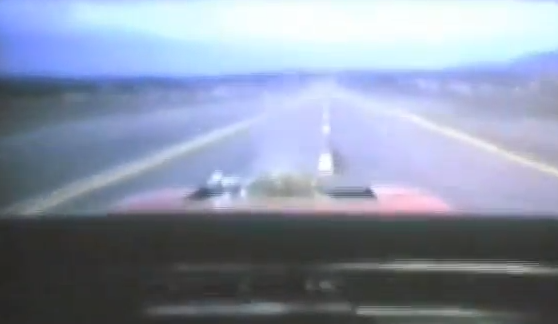 This is one of the most “pure” drag racing videos we have ever posted and it comes from Iceland, circa the 1970s. What do we mean by pure? Well we have a muscle car with the hood hacked open and the carbs exposed running full steam down what seems to be a drag strip made out of a desolate highway. Did we mean street race? Nope, we meant drag strip. If you look close you can see a box on the left side of where the car stages that looks like it would contain timing lights. Plus, there is a definite finish line because the guy lifts quickly after crossing it. He then proceeds to make the turn to head back up the course to the starting line.

This is as stripped down and honest as it gets with drag racing. No stands, no t-shirt cannons, nothing but the desolate Icelandic countryside and a flat, wide stretch of road. Add in the four speed equipped muscle car and we’ve got the gearhead version of perfection. It gives us chills. We were amazed that the clip had sound. Not because it was from Iceland or because we thought that they were in some technological black hole, but lots of videos from this era were still shot on 8mm cameras that didn’t record sound.

Stuff to watch for in the video centers around the carbs. It is incredible how much fuel is being sucked out of them as the car heads down course. There is a constant fog/mist of fuel that is either reverting or being vacuumed out of the carb by the air passing over it. Kind of neat to watch it happen. We’ve been told that the design of the famed “Grump Lump” hood scoop was predicated on stopping this from happening.

THIS IS ALL TIME LOW-FI DRAG RACING PERFECTION – REVEL IN IT LIKE WE DID BY HITTING PLAY BELOW!