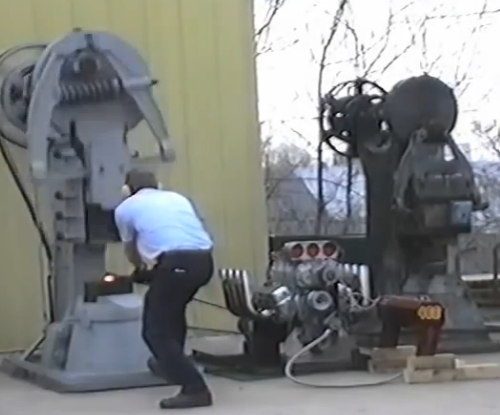 Trip hammers are cool machines designed to literally smash and bash whatever is placed in them flat. In the case of this video it appears to be a thick piece of solid steel bar stock that gets “the treatment” in the 500lb Little Giant hammer. The rub? Said hammer is powered by a blown big block Chevy engine! We have no idea why someone did this, but we think that it is pretty cool that they did. Outlandish, inefficient, and louder than the hammer itself? Sure but only normal people think that those are negative attributes. Those are all check marks in the positive column for us!

The engine is just run at idle and there has to be some sort of the big pulley bolted to the back of the rat that spins a belt that runs the hammer. When the operator of the hammer presses the big foot “clutch” down to get the weight moving and the hammer hammering the engine doesn’t even shrug, it just sits there sounding great with its zoomie headers working away. If we had to guess, the engine is running on alcohol because there’s no sign of a cooling system attached to it.

About the hammer itself, which is fascinating to watch. The Little Giant company of Minnesota has been in business for over 100 years making trip and power hammers. Technically, this one may be considered a power hammer and not a trip hammer but frankly we’re not sure that matters in this case because they point of the whole exercise is that the pounder is being run by a big block Chevy engine and not air or electricity like others we have seen. Also, this 500lb unit s huge as compared to lots of the other stuff you’ll see on YouTube that have 25lb, 50lb, or similar sized weights. In massive industrial applications, this 500-pounder would look like a kids toy but for regular dudes like us, this is one mean piece!

Thanks to Bob Hagan for the tip!

Hit the link below to see a 500lb Little Giant Trip Hammer smash and bash while being powered by a blown Chevy rat motor!