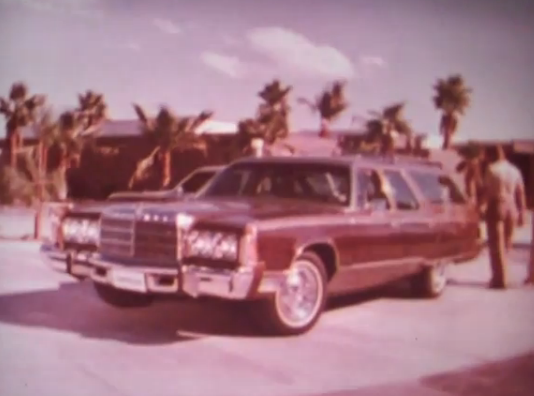 Dealer “education” videos are always fun to watch. These were the films that car makers produced and distributed to their dealer networks who then showed them to all the sales people in order for them to highlight the parts of the car that would influence people’s buying decisions. In 1976, SUVs had not yet become the plague of the automotive world and the station wagon was filling the roll that the modern SUV does and doing it better than the modern SUV does, but that’s another rant for another day. These station wagons were pretty big ticket items and companies had multiple sizes and trim levels of wagons to fill different holes in the marketplace. In this video, you’ll see the mondo Chrysler Town and Country wagon shown up against the equally huge Chevy Caprice estate, and the Ford’s Country Squire.

From the styling to the interior and other bits, each part of the Chrysler is shown to be superior to the competition and the weirdly voiced narrator deftly guides the viewers through the comparisons, giving sales people plenty of points to tell buyers about when trying to influence their decision. The best part of the whole thing is the comparison they do between the three wagon’s rear facing seats. They focus on the room for the passengers, not on anything else, like the apparent lack of seat belts, etc. Don’t get us wrong, riding in the back of the big wagon rules the school, this video just highlights what the concerns of the day were in 1976.

We’ve never actually seen a 1976 Chrysler Town and Country on the road….ever. Want to know why? They sold a total of 4,300 of them during that model year. The car shown in the film would have been equipped with a 440 standard, but could have been optioned with a 400 if you wanted to wuss out. How did that compare to the Ford and Chevy? Ford sold an amazing 47,000 Country Squire wagons that same year. Chevrolet moved 31,000 Caprice wagons. We’ve seen Fords and Chevys but never a Chrysler and seeing those sales numbers, it makes perfect sense. We’re shocked that the company actually spend the money to fund this video for a model that sold so miserably.

Other things to watch for are the very cool power rear tailgate that the Chevy has, the bizarre and cramped rear seating of the Ford, and…hell, all of it is great. The music, the bad clothes and the truly weird sounding narrator. Relive 1976 all over again in wagony style!

PRESS PLAY BELOW TO SEE THIS VIDEO TOUR OF THE BIG WAGONS OF 1976 AS SLANTED TOWARD CHRYSLER!