Classic YouTube: Cannonballs Off A Sunken Dodge, A Freightliner, And A Severely Abused Crown Vic!

Jul 02, 2020Bryan McTaggartRACING & ACTION, VideosComments Off on Classic YouTube: Cannonballs Off A Sunken Dodge, A Freightliner, And A Severely Abused Crown Vic! 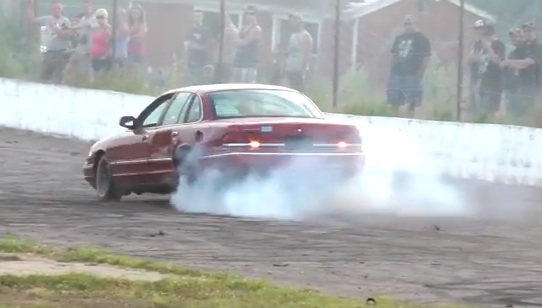 My brain is still trying to process what, exactly, was going on in Moncton, New Brunswick last year. Was there something in the water? No, not the pond…that’s where the red, white and blue Dodge Dakota ended up. (Thanks for that one, eh?) No, we are referring to the absolutely motley arrangement of vehicles that showed up for the Atlantic Nationals Burnout at what I believe is Petty International Raceway. Sure, there are some stout performances, one from a nasty little Capri, the other from a Freightliner COE that put on a good show. Even the Nissan Hardbody that broke it’s freaking frame did a nice set of donuts, as did the Plum Crazy 1980’s Dodge. But by far and away, the winner of the day? That would be the guy who beat the ever-lovin’-hell out of a Crown Victora. Neutral drops, reverse-to-drive burnouts, throwing it into reverse at speed…you name it, he did it. Whoever built the AODE that went into that particular car deserves an award, because that was an impressive round of punishment.

Watch This Huge Deuce And A Half Truck Drive Through What Looks Like A 6ft Deep Swamp...With A Twist Take A Tour Of This 86 Year Old McCormick-Deering Grader That Still Plows Snow In Oregon