Nov 28, 2020Chad ReynoldsCAR FEATURES, New Products, VideosComments Off on This Redcat ’64 Is An RC Impala Hopping Lowrider That Would Make Any Hot Rodder Happy For Christmas 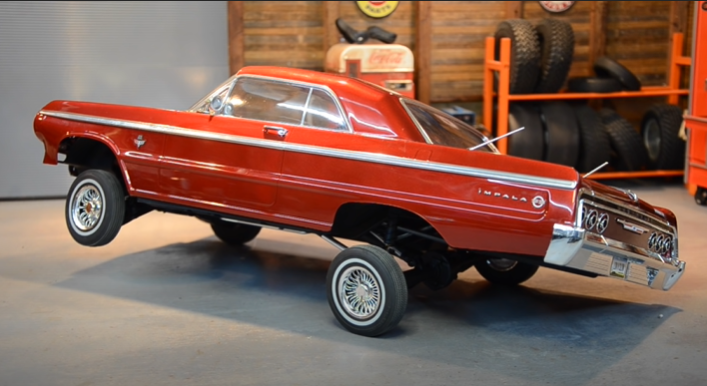 I’ve always been into RC cars and such, but in the past decade or so the RC car world has gone to a completely different level. With scale realism becoming more and more incorporated into even the most bad ass race vehicles, there has never been a time where hot rodders could more realistically relate to their rc cars. When Redcat announced that they were going to move beyond muscle cars, and work with real lowrider legends, to come up with a lowrider that not only looked the part but performed all the right moves, the rc world paid attention. Well it is out now, and it looks awesome. Yes you can customize it using decals and add-ons that come with the kit, but in this unboxing video you will see it completely stock. There were a couple minor issues, but overall this thing comes out of the box in epic shape and looks like a riot to play with.

It isn’t fast, it isn’t setup to race, but if you want to flex and hop and roll around with one wheel in the air with legit three wheel motion, then this is an rc car you’ll want to play with. It’s cool. We can see competitions in the future for families that get these, and we’re sure that some garage action while drinking beer will happen as well.

Check out the video and let us know if you’d want one under the tree Christmas morning.