Unhinged Retrospective: We Put The “Competitive” Into “Fun and Competitive” At The BFGoodrich Pit Crew Challenge During SEMA 2015! 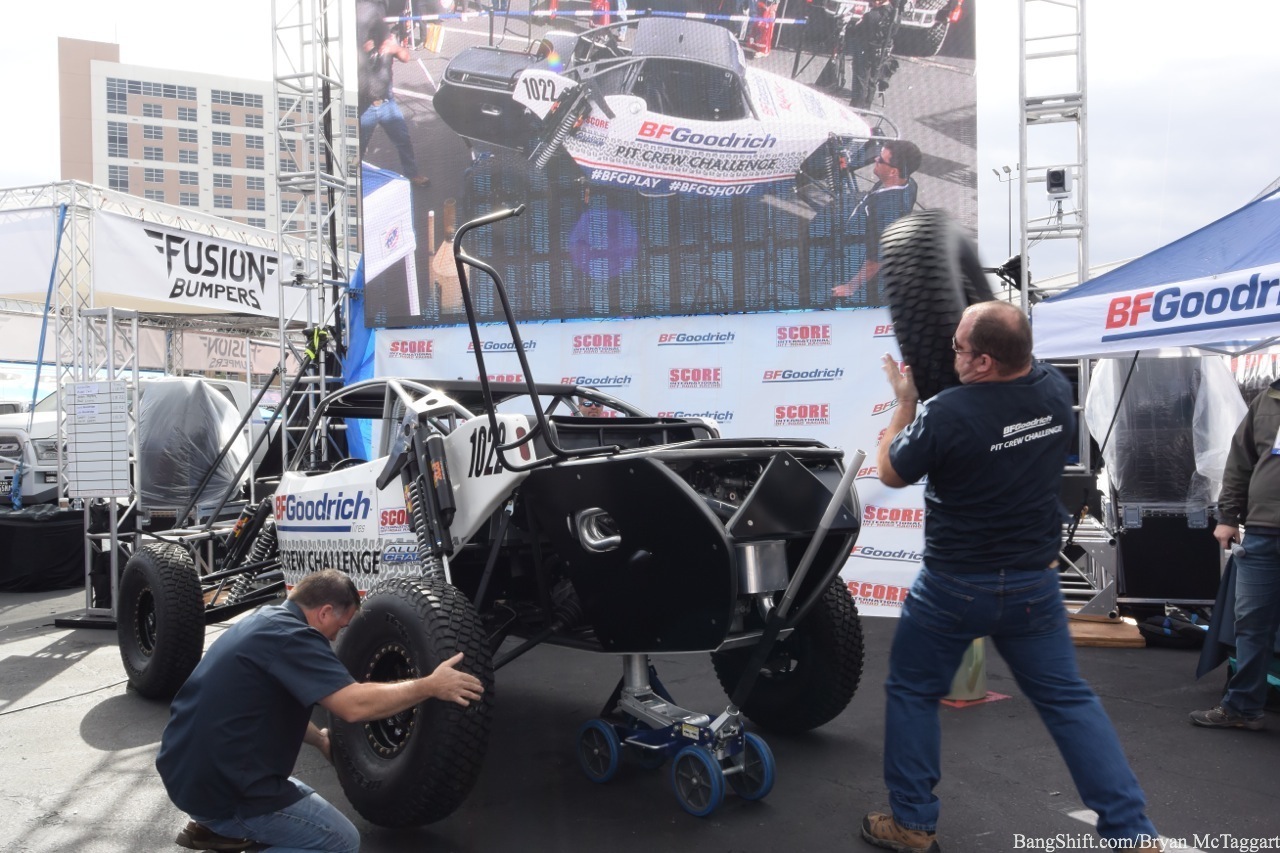 In all of this downtime, I couldn’t help but look back on some of the fun times I’ve had over the years, and this one was one of the best. BFGoodrich offered me a shot to have a little bit of fun at the 2015 SEMA show, and all I had to do was a NASCAR-style tire change on a class 8 buggy with Brian Finch. Hm…how bad could that be?

It’s been just about a month since the whirlwind of automotive overload, hard hours, miles of walking per day, killer food, excellent drink, business connections and overall awesomeness that was SEMA 2015, and once again we managed to make it out alive, in one piece, with minimal scarring. And after pouring over the hundreds of pictures we shot, all of the features we found, every news clip we got, and long after we recovered from the jet lag and …uh, the “jet lag”…we realized that we forgot to show you one spot of SEMA that we actually were doing some hands-on work at! Here’s the story…

For those of you who don’t frequent the forums, let me explain: I’ve attended SEMA twice before the 2015 show. The first time I signed up to be a part of an opinion committee. It required me to walk around and look at the new products, and I was allowed to be in the show Thursday and Friday that week. That was 2010, and that proved to be a huge year in my life: I started working towards a degree, met Brian Lohnes for the first time, proceeded to make my first trip to Vegas unbelievably epic (don’t say the words “Everclear Slurpee” to Brian unless you want to see his face twist up into honest physical pain!) and I met my wife there, as well. By the end of it all I was worn out, exhausted and wanting more. Next time was 2012, and coincidentally was also my honeymoon. Ever since I want to go back because SEMA is the only place where I know, beyond a shadow of a doubt, that I will always find something new, creative and worthy of my time. Always. But with about a month left to go, it didn’t look good for me to go this year and I was preparing to stay back and support the site as Brian and Chad got to do their thing…right up until Brian was asked to be a judge for the Gran Turismo Awards. That one request locked up any free time he may have had, so when the folks at BFGoodrich wanted one of us to come participate in something special this year, Brian gave them my name and just like that, I was on my way to Vegas.

BFGoodrich had a huge spread going on outside, and it was mostly focused for the off-road racer crowd. They had their Baja T/A KRs and KR2s on display with the Baja 1000 trucks that they ran at Las Vegas Motor Speedway, and next to one of their tents they had a Class 8 buggy with a jack underneath it. This is where I came in: every day during SEMA, BFGoodrich was going to be holding the BFGoodrich Pit Crew Challenge: in teams of two, the competitors would change the tire on the buggy, then simulate the refueling using a can. Fastest time of the day would win a set of free tires, and the only way to get penalized was to leave a loose lug nut, fail to latch the tire back on, or forget to put the gas can back where it belonged. And immediately, I was on board…have you priced tires? They are damned expensive! Besides, I’m here representing BangShift on behalf of BFGoodrich…there was no way I was going to embarrass anyone on this gig. 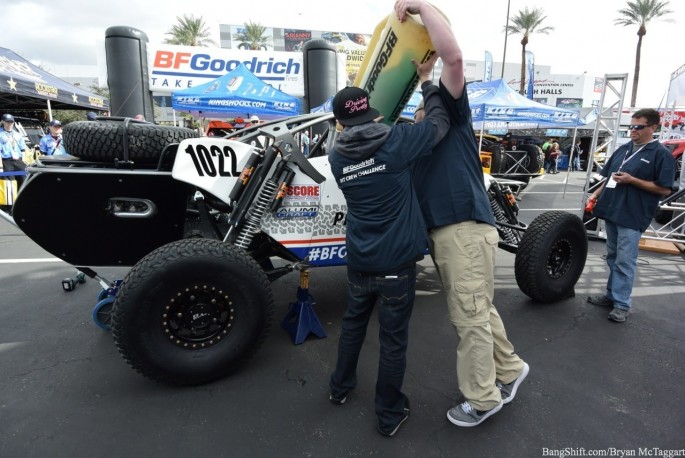 BFGoodrich might not have had the same kind of faith in my skills that I did, however, because they paired us journalistic folks up with their “brand ambassadors”…guys like Rich Minga (Baja 1000 racer and Hollywood stuntman), Rob Maccachren (multi-winner of Baja and SCORE events) and Rod Hall (a freaking legend in the off-road racing community). I felt good before learning that…now I was feeling downright cocky. After watching some of the early rounds, I felt great. It wasn’t like we had to change out a complete axle assembly or anything like that. We had a electric impact wrench for the tires, a jack, and we had to simulate ten seconds of fueling. Piece of cake.

My time slot was for 12:30 on Wednesday and I was there nice and early, waiting for the go-ahead. Initally I was told I would be working with Minga, but something happened and instead I was paired off with Brian Finch, a face that we at BangShift are very familiar with, having seen his 1971 Camaro at events all over the country. As I was getting prepared I was informed that Finch is “very competitive” and wants to win. In person, Finch was polite but from the first handshake I could tell that he was formulating his plan for winning. The plot was simple: he would change the tire while I handled the dismounting/mounting of the tire to the truck. We couldn’t fuel until the buggy was on the ground, and our time didn’t stop until the fuel can, which weighed in at about seventy pounds or so, was back in a tiny little box. With plan in place, we buckled down and prepared for the clock to go off. 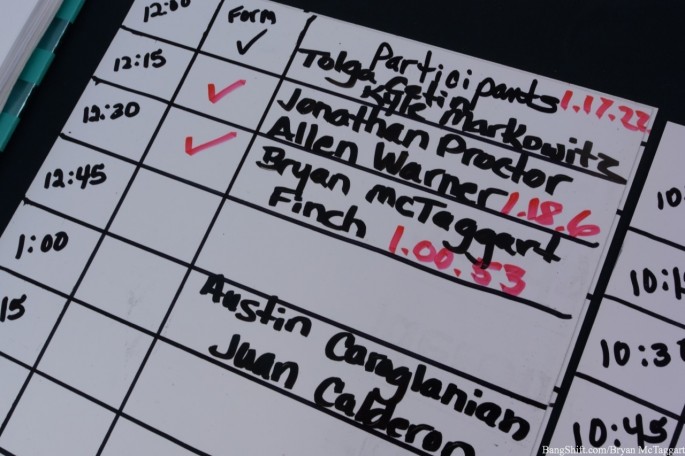 What isn’t shown in the video is that we did get hit with a penalty, which at two seconds per lug nut, brought our time to a 1:00.53. That was far and away the fastest time of the day at that point, and I’m going to cop an excuse: shortly before our turn, another team had basically used the “cross thread that sucker until it stays put” method on the lug nut I am pretty sure was in question. Unfortunately, our time didn’t stick…towards the end of the day, we got edged out just barely…no more than a tenth or two. It didn’t help the slight headache I got from that fuel jug (that impact to my head was a lot harder in person, I promise) but fun was had, and besides, BFGoodrich treated me well the entire time I was on the ground, and even paid for some killer carne asada tacos for my lunch. Gotta love that!

One thought on “Unhinged Retrospective: We Put The “Competitive” Into “Fun and Competitive” At The BFGoodrich Pit Crew Challenge During SEMA 2015!”