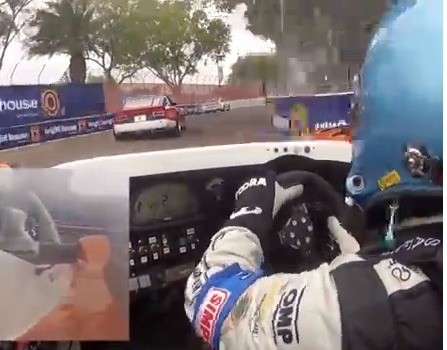 Lots of car guys love the hard rocking tunes of AC/DC, in fact both Chad and I are among that group. As if we needed another reason to dig the jams, it turns out that Brian Johnson is a radically hard core car guy that doesn’t just own a bunch of stuff to look at. The man is a racer as well. Johnson likes to get into the thick of it wheeling different cars in historic road races. His collection spans the decades but in this video you’ll see him in what is probably his fastest machine, a Pilbeam. What the hell is a Pilbeam you ask? Think about the gnarly open cockpit “LeMans prototypes” to get the basic shape in your head. They are very wide, very low, and extremely fast as you’ll see in the footage below.

Pilbeam has been around since the mid 1970s and has been building race cars ever since. Their cars have dominated the hill climb scene in England for years and have competed at LeMans many times as well. The founder of the company Mike Pilbeam had an extensive history in Formula One working with teams like BRM and Lotus before going his own way. The company has build full bodied race cars for the likes of GM and continues to innovate and build cool stuff today. We’re honestly not sure what is powering Johnson’s Pilbeam in this video but it is certainly snotty and up to the task of swallowing his competitors whole!

HIT THE LINK BELOW TO SEE AC/DC’S BRIAN JOHNSON HAMMER THE ROAD COURSE IN A COOL PILBEAM RACER!

Cool Gearhead History: Ads From The Pages Of Super Stock And Drag Illustrated Circa 1964-1966 Retro Review: This MotorWeek Review Of The Then New 1991 GMC Syclone Is Awesome