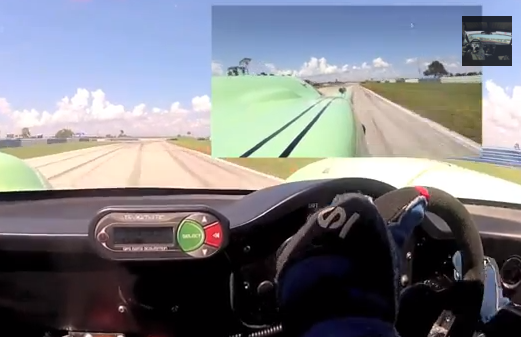 There are few things cooler than guys who have really rare and special stuff who are unafraid to get after it on the race track with said rare stuff. This video of a Lola T-70 MK III B Coupe getting worked around the famous and historic course at Sebring rules because the car is a one of 16 ever built piece that packs a Chevy big block that sounds really….and we mean REALLY good when the throttle is thrown open and the hounds of hell are released on the straights.

The car is run out of the Heritage Motorsports stable and is driven by the mysteriously cryptic DHR. We’re note sure who he is, but Damn Hard Racer seems like something we should have named one of our kids. Kidding of course, that isn’t the pilot’s name….we think. Anyway, there are multiple cameras used in the production of this video and our pal Craig Sutherland tipped us to it. Built  Long before the age of driver aids, KERS, and major league safety, the car is a beautiful and rocket fast piece. There’s a gated shifter you’ll see the driver working and you can tell how much steering effort is needed to wheel the car and its huge slicks all around the track.

We want in the seat badly!

PRESS PLAY BELOW TO SEE A Lola T-70 MK III B Coupe GET WORKED OUT AT SEBRING!