Watch A Lucas Oil Off Road Racing Series Truck Over Shoot A Jump And Endo Like A Mother! 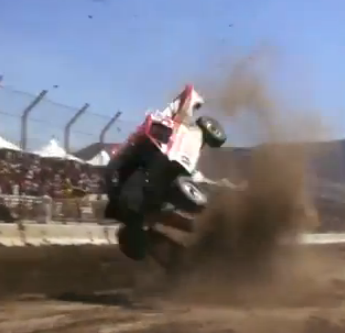 The Lucas Oil Off Road Racing Series is pretty much chock full of non-stop action. There are trucks flying all over the place, dirt getting slung off of rear tires, passing, and aggressive moves to lead the pack. The trucks that compete in the series are highly engineered marvels designed to stand up to the rigors of this style of racing. Their bodies are thin fiberglass panels that are mostly hanging off of the truck by the time these races are over. Contact isn’t just something that happens sometimes. Contact is a way of life for these trucks. They are constantly bumping and nerfing each other in the tighter sections of the courses that these racers compete on. The other part of this racing that people love are the high flying antics of the trucks. Every single course, no matter the location has at least one big jump. The course in Lake Elsinore, California is no exception as racer Rodrigo Ampudia found out.

You’ll see Ampudia hit a jump virtually wide open, catch big air, and carry that air a long, long way. Unfortunately for him, the truck was nose heavy and physics took over. What would normally look like a graceful flight through the air ends up being one of the most violent off road truck endos we have ever see. This is as big a “snap endo” as we have ever seen. What do we mean? Most of the time when something flips over frontwards from a jump the rotation is fairly gentle. The landing sucks, but the actual rotation of the vehicle forward is slow. Not this time! Ampudia catches the front end into the dirt and then all of a sudden the whole truck gets violently launched forward and over. The hit seems to have broken virtually everything, as you can see the truck getting towed off and it is a jacked up mess. We’re happy to report that Ampudia was OK following the wreck.

PRESS PLAY BELOW FOR OFF ROAD TRUCK VIOLENCE OF THE HIGHEST ORDER!

Roadkill: Freiburger and Finnegan Hit The Road, Do Burnouts, Save A Custom Mercury, Overheat, Make A Father and Son's Day A Couple Of Guys From An Awful CNBC Show Make The Worst Video About Nitrous Ever - Seriously

One thought on “Watch A Lucas Oil Off Road Racing Series Truck Over Shoot A Jump And Endo Like A Mother!”