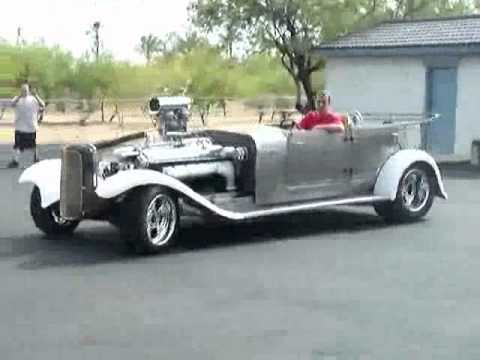 Since I am hung up on engines today, here’s a video highlighting a street rod project that is using a massive Merlin tank engine for power.The build, as you would expect, seems  to be totally one off and by the looks of it, the finished car is going to be bitchin’, and correctly proportioned to the mountain motor up front! The coolest part of this thing to me is the fact that the builder swapped out the original carbs for a set of Holleys, put a modern style accessory drive on the front of it and ditched the mags for normal coils apparently.

In this video you will see the car rolling around at low speeds, presumably to test out the steering and brakes. It sounds like no other big gasoline engine around and probably has a lower redline than most diesels. I have no idea what transmission is behind the engine, but I’m hoping it has a bunch of forward gears to get this rod rolling at better than highway speeds.

I’m not sure of the horsepower rating because this is not one of the supercharged airplane engines. Those babies were near 2,000hp, so this one is considerably less than that, but who really cares. The thing displaces nearly 1800ci and this guy is guaranteed to have the only one at any show he takes his hot rod to!

We cannot wait to see it with the body completed!

Sold Out! ECTA's Ohio Mile April Event Reaches 175-Car Limit Question of the Day: What is the Ugliest Engine Ever?