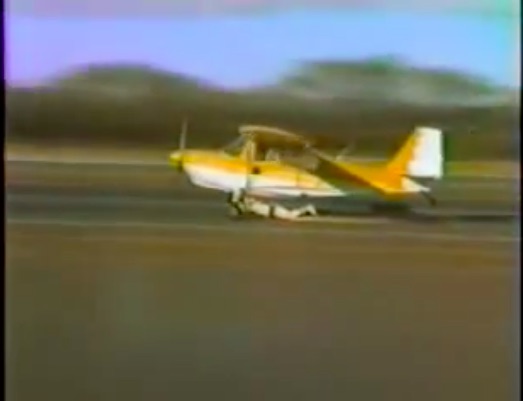 There was a whole stuntman craze that exploded after Evel Knievel rocketed to worldwide fame in the 1970s. Of course there were the copycat motorcycle jumpers that popped up all over the place but there were also guys who came up with wacky new acts that would get them on television and booked at events all over the country with the hopes of wowing crowds for fame and fortune. Jim “Bullet” Baily was one of those guys. His “act” was both bizarre and death defying. It also produced lots of sparks and he had a cool accent that played well on television so once shows like That’s Incredible got their hooks into him, he really got some face time. Oh…what did Baily actually do? Well at first he would get dragged down race tracks behind funny cars and other fast racers while wearing a suit covered in metal pucks that made sparks and allowed him to skid for hundreds of feet after “letting go” of the back of the car.

He advanced this act by really ramping up the danger level and instead of just skidding behind a car, he would hold onto the side of the car and then release himself and slide through a very long flaming tunnel of straw. After bursting out of the end of the tunnel, he’d lay there in “distress” while his safety crew rushed to his aid and then he would spring up, much to the delight of his fans and admirers…but that wasn’t good enough.

The ultimate extension of his act was to involved becoming part of and airplane’s landing gear and in this video you will see that dream played out at a private session on a strip in Maui, Hawaii. Baily repeatedly comes down holding onto the fixed gear of the small plane, releasing himself and sliding along the runway exactly as planned. It looks pretty freaking wild, even through the slightly foggy lens of an early 1980s video camera. Does it make any sense? Hell no, but it requires sheer balls the size of which few humans ever had.

The truly amazing part of this video is that we’re not sure many people who know about Baily have any idea that it exists. Urban legend always had it that Jim died while hanging below his plane on the FIRST attempt at actually completing this stunt. He did die from falling down when his cable prematurely released while practicing this stunt, but it is clear that it was not the first time. This video vindicates him on some level because it shows he actually did “stick the landing” a couple times before he bought the farm while making an unscheduled high dive due to an equipment failure.

The video and the whole scene speaks to that early 1980s era where “stuntmen” were constantly trying to outdo each other and come up with new salable ideas to make a fortune. Jim certainly got the fame, but he never got the fortune….at least now we know that his grandest idea actually came to pass before he did.

LSFest 2021 Pics: The LSFest Burnout Contest Is Legendary, And Here Are All The Photos! Sunbeam Tiger Video: Ride Along As The Tiny Small Block Ford Sports Car Rips Monte Carlo