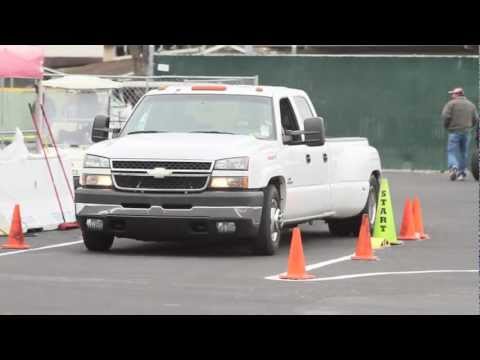 Ridetech’s Bret Voelkel is a mad man. He is also one hell of a driver, so when we saw a video that showed the Ridetech Chevy dually truck attacking the autocross at the Goodguys Pleasanton, California show we had to watch. As it turns out, Bret wheeled the 7,000lb behemoth around the cones in a quick enough time to earn a mid-pack finish for the weekend. Of course, he also attacked the course in one of the company’s high performance cars, but the freak factor of seeing this battleship romp around the course cannot be beat.

The truck is of course riding around on a Ridetech suspension and it looks great with a chin scraping stance and the rear roll pan. You’ve got to feel somewhat bad for all of the cars that finished behind the big truck because let’s face it, being defeated by a dually on an autocross is like getting your ass kicked on the drag strip by a stock Honda Civic. It is just something that you don’t want to see happen to anyone, especially someone you like.

The video proves that you don’t need overkill horsepower, overkill suspension, and a featherweight car to have fun and run hard. Talent behind the tiller accounts for a lot and being able to conserve your momentum and be smooth on the course will get you a long way. It is awesome to see this truck make a clean lap and leave a bunch of people slack-jawed in the process.

Question of the Day: What is the Most Dumbass Automotive Argument? Jeep Mighty Forward Control, J-12, Traildozer and other Concepts Revealed