Watch the Crusher Camaro Hit the Strip and Run 10s! 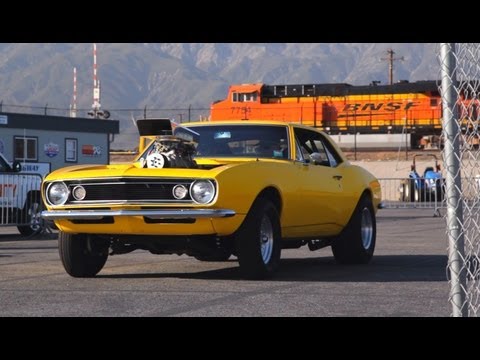 Freiburger and Finnegan are at it again, this time with the well known Crusher Camaro. The Camaro has been a part of Hot Rod off and on since the mid 1990s when it was saved from being crushed at a junkyard, hence the name Crusher Camaro. The car has seen all sorts of different engine and suspension combos, bit it is living right in the present tense with a blown big block Chevy, nose high stance, and grunt power to push it deep into the 10-second range at the drag strip.

The guys road tripped the car to AZ a while back and that was cool but we were all wondering just how hard it actually ran. Reliability is an awesome thing but ultimately as hot rodders we all ask the same question…how fast is it? This video answers that question at the Auto Club Dragway, which is currently shut down over a noise dispute. Ironic that a car once saved from the crusher runs on a drag strip now shuttered because of more state of California stupidity.

Anyway, we don’t want to dwell on the negative. It is cool as hell to see this car getting beat like a rented mule at the strip!

Press play below to see the Crusher Camaro attach the drag strip!

8 thoughts on “Watch the Crusher Camaro Hit the Strip and Run 10s!”