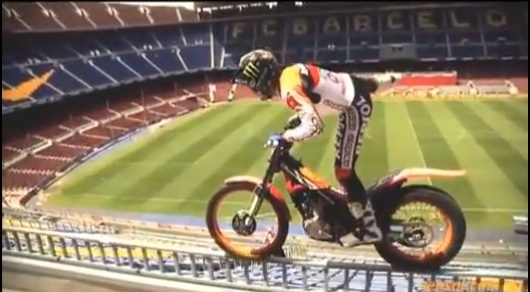 Trials riders are insane, pure and simple. It’s a bit odd to compare them to any other motorcycle discipline, because unlike motocross, GP, Dakar or even sidecar motocross, trial riders aren’t really trying to motorcycle. They’re just pretending that they are BMX riders, but with an engine and the ability to use that engine to their advantage in trickery instead of just going faster than the guy pedaling his heart out.  The concept is simple: using balance and careful applications of throttle and brake, the rider is to navigate obstacles without putting a foot down. If you think it sounds easy, send us video of you actually doing it. It’s not, even on the highly specialized bikes that riders use, and the obstacles aren’t gentle hills or the occasional rock in the path. These guys do things normally seen in BMX Freestyle with these bikes, including bunny hops and pogo-ing on the tire.

This rider is Toni Bou, and he’s the current outdoor trials world champion. In support of FC Barcelona’s World Cup Win, he took his Montesa Honda bike and played around at their stadium. Anyone who has the sheer fortitude to ride a bike balanced on a railing like that has my utmost awe and respect…namely, because if I tried that even on my best day in my best shape ever, the end result would leave me in the emergency room.