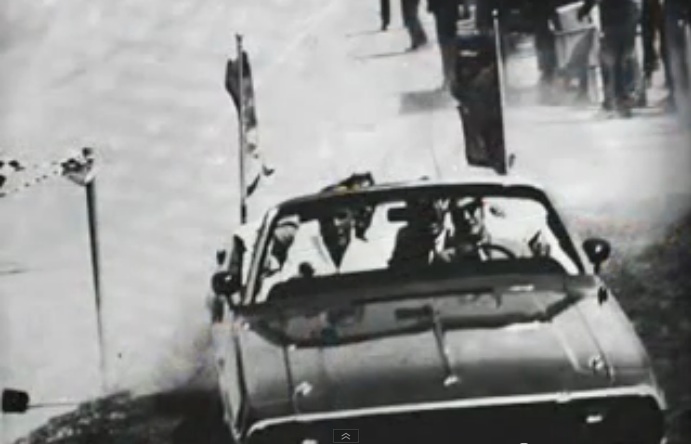 The 1971 Indy 500 Pace Car situation was screwy from the start, but no one in their right mind could have predicted the stunning crescendo to the story that would take place on the opening lap of the race. We’ve heard the story told but never actually seen the carnage. Luckily for us, we found the video and it is stunning.

For 1971, no manufacturer provided a pace car for the race. It came down to local dealers to provide the cars and the honor was given to Eldon Palmer, the owner of Palmer Dodge in Indianapolis. By “winning” the right to supply the cars he was also allowed to drive the car on the pace lap of the race. Muscle cars were never known as good stoppers, and this video is proof as to why.

The day before the race, Palmer was allowed to make practice runs in the 383 powered 1971 Challenger convertible. On those practice runs he placed a cone on pit row to show him where he needed to start slowing down in order to not have any problems after he broke off from the field. As you’ll see in the video, he was absolutely hauling ass down pit row and began to brake way too late to stop. The problem? Someone took the cone away and he waited too long to apply the brakes. The car slid into a photographers stand that was packed with people. As you’ll see in the video, the stand comes crashing down and people pour into a heap. No one was killed, but 22 were injured.

Riding in the car with Palmer that day were Tony Hulman, the owner of IMS, ABC sportscaster Chris Schenkel, and hero astronaut John Glenn. None were injured.

It is amazing no one was killed.

BangShift Question Of The Day: What's The Coolest Promotional Car Or Truck Ever? Doing it Wrong Video: Parade Lap Spins at the 1992 Indy 500