Watch Eddie Hill’s Insane Wreck From NHRA Sonoma 1997 – He Was Back At The Track The Same Day!

Jul 20, 2021Brian Lohnes1320 Videos, BangShift 1320, BangShift News, VideosComments Off on Watch Eddie Hill’s Insane Wreck From NHRA Sonoma 1997 – He Was Back At The Track The Same Day! 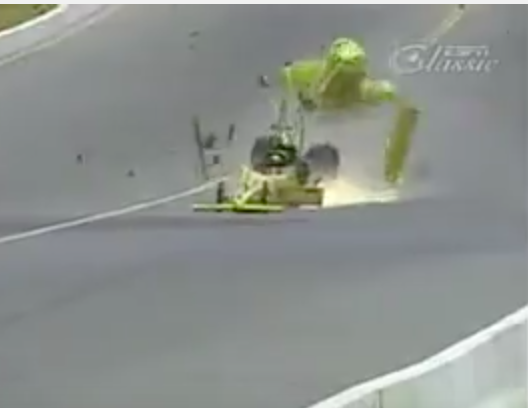 Eddie Hill had some truly crazy rides in his day. From incredible drag boat crashes to flying top fuel cars, Hill survived stuff on multiple occasions that looked very, very bad. This video from NHRA Sonoma 1997 was one of those rides. As you will see during qualifying Hill made a run and then all hell broke loose in the shutdown area. While we’re not 100% sure of the cause, it looks like everything goes wrong when the parachute is deployed.

When you see the wreck the first time it seems that maybe a tire came apart but when you see it from the high second angle later in the video it almost seems like the deployment of the parachute itself caused the wing to fail and then it got exponentially worse from there. The rear end gets ripped completely out of the car and goes bounding down the track like an overgrown barbell.

Meanwhile the car careens across the course hits the wall and folds around on itself before entering the sand and going into a series of flips and rolls. Hill was flown from the track in a helicopter to the hospital but was back the same day and his crew was already working on the backup car. He did not make another pass that weekend but all indications are that he was back at the next race. Whether you consider that toughness or insanity you have no other option but to be impressed with Hill’s guts to carry on. Us? We’d be one and done after surviving a deal like this!

The 2022 Audi RS3 Gets More Power, More Technology, More Speed! Gearhead History: This 1960s Swamp Buggy Racing Video Is An Awesome Window Into The Past